When speed is of the essence

3 minutes read
Previous Next
When speed is of the essence

Heathrow, Amsterdam, Frankfurt, Munich, Singapore – there is one at almost every major airport in the world, but it still lives a rather unknown existence. It is one of the most important vehicles for fire departments and rescue workers at airports, is deployed as often as 2-3 times every week – not including training operations – and has been directly responsible for saving many lives. We are talking about the Rosenbauer Rescue Stairs, which is now available in two versions.

The Rescue Stairs E5000, the smaller of the two Rescue Stairs, had its official world premiere in June 2015 when it was introduced at Interschutz. Its ‘big sister’, the E8000, has been in service for even longer.

Airfield operation of the highest level

I am often asked what its purpose is, because to evacuate airplanes there are emergency slides and also the ‘normal’ passenger exit stairs. The main purpose of these is actually very different to what one would imagine: In most cases, they are used to provide rapid access to the aircraft, in order to allow emergency personnel – such as the fire department, rescue crews and emergency physicians – to be able to be there quickly in case of medical emergencies, and also to transport sick or injured persons. From time to time, however, they are also used for evacuation purposes to (quickly) get all passengers off the plane.

The special features of the emergency stairs are the speed of deployment and also the necessary comfort for passengers to leave an aircraft in an emergency situation via horizontal steps on a 1.5 m wide, well-lit staircase. These steps are always kept horizontal by means of a mechanically simple system, which makes the vehicle all the more remarkable. 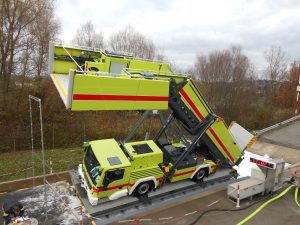 Time and again, I am amazed by the extreme situations this staircase has to withstand. Tilt angles of 12° or more with a fully extended staircase may not sound like much, but the pictures of this show how formidable it actually is. Even 30° tilt angles are not unheard of for the stairs – some black diamond slopes in the Alps are flatter than that.

Of course, nobody wants to try such an extreme situation for the first time in a real application, so we had to test the functions during certification. For load and wind stability tests, we had to call in extra-large cranes in order to simulate these conditions.
A lot of work, but nothing should be left to chance when it comes to making sure that the emergency stair is really ready for the hard work ahead – while hoping that as few people as possible will ever get to see it in the first place.

Is this impression correct, or have you often noticed this vehicle at the airport?

Further information about the Rescue Stairs in the blog article “Rescue stairs: the height makes all the difference.”