A semi-trailer truck in the front, a tiller cab in the back, and 15 m of pure firefighting technology in between. Introducing the new ladder truck of the Seaside Fire & Rescue Department on the coast of Oregon. Why did Chief Daniels and his crew opt for this particular type of fire-fighting vehicle? “It allows us to get around corners better and maneuver around obstacles like parked cars more easily than, for example, a rear mounted ladder of the same rescue height.” It’s hard to believe. And yet the steerable rear axle really does provide the vehicle with amazing maneuverability, despite the vehicle’s total length of 18 m. If the driver and his tillerman work perfectly together, the tightest turns and even elegant drifts are possible.

Another important point that eventually tipped the scales in favor of the tiller: Compared to a classic aerial ladder with the same ladder length of 100 ft (30.5 m), the tiller height is lower and fits into the existing fire station.

The Seaside Fire Department knew exactly which functions the new vehicle should have. It needed to be a quint, “so that we can react flexibly to the most diverse challenges in the field,” says Chief Daniels. A quint is a vehicle equipped with a pump (1), tank (2), full firefighting equipment (3), an aerial ladder (4) and other climbing aids (5). The pump is installed in the middle of the main vehicle, while the hoses, fittings, and the technical equipment are mounted on the aerial rescue platform. There is plenty of storage space in the many equipment compartments. The Seaside tiller has ten on each side of the vehicle, three of which extend across the entire body width, and two more are located at the rear under the tiller structure. This is where the bulky ladders are stowed.

The chassis is a Rosenbauer Commander with 500 hp and twin tires on the rear axle. Mounted on top of it is the turntable for the four-part ladder, which extends to a rescue height of 100 ft (30.5 m). Two robust, telescopic jacks guarantee a solid footing during aerial ladder operation. The electronic control ensures smooth ladder movements (ultra-smooth starting and stopping, no abrupt deceleration of the ladder, etc.) and prevents operating errors by the operator. A sophisticated lighting system on the ladder, access steps and handrails, vehicle outer edges, jacks, and ground contour increases the safety of the crew during nighttime operations. The ladder is galvanized and the firefighting superstructure is made of aluminum to ensure high corrosion resistance.

Seaside Fire & Rescue is in charge of fire protection and rescue services in the city of Seaside located on the Pacific coast of Oregon as well as in the surrounding rural areas. The crew consists of 35 certified volunteers led by a professional team of Fire Chief, Fire Marshall, and Training/Safety Officer. Numerous members of the department have additional qualifications (water rescue, aerial rescue, handling of hazardous substances, wildland fire fighting, etc.) and are regularly called upon for trans-regional deployments.

With the new Tiller Ladder, the department has one of the world’s most iconic fire engines and a truly versatile tool to handle the full scope of fire fighting operations without having to dispatch another vehicle. 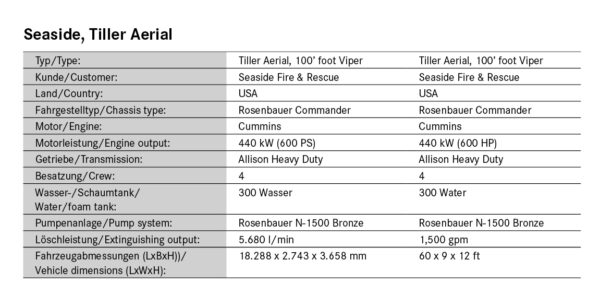 Head of Area North and Middle America (until December 2021)