The prototype of the Rosenbauer fire service robot had its TV premiere in the 7th episode of the ORF show “Feuer und Flamme – Der Wettkampf der Lebensretter” (Red-hot – Rescuer Contest), in which 12 firefighters compete for the title “Austria’s Best Firefighter”. But this was not the first operational highlight for ‘Raupi’, as we have named the prototype, because it’s already been in use for several years in testing firefighting scenarios for the challenges of tomorrow.

The multi-functional tracked vehicle was also presented to the public at Rosenbauer’s unveiling of the CFT (Concept Fire Truck) in autumn 2016. This vehicle complemented and accompanied the concept vehicle on its tours in order to give important formative insights into electrically powered tracked vehicles and to inspire customers to think hard about the operational challenges that the future will bring.

But in the meantime, we have also been busy internally at Rosenbauer subjecting the prototype to countless tests in order to gain further knowledge and experience and to try out ideas in practice.

Rosenbauer supports the new ORF (Austrian Broadcasting Corporation) show through the provision of equipment and vehicles. When the program was conceived, the tracked vehicle was proposed as a means to provide an insight into the near future of firefighting – and the idea was enthusiastically accepted. From this point on, I was able to contribute my experience as a product manager for fire fighting systems.

The biggest challenge for myself and the production team was to deploy ‘Raupi’ as realistically as possible, while also creating action and drama for the audience. A difficult challenge had to be crafted in order to really put the two teams to the test and make them earn the last ticket to the final. But the viewers always had to be aware that, in spite of everything you see, what is shown on a TV program is very different to how things work in real life. Because a real-life operation should keep the drama and action to a minimum, with order and discipline being of the utmost importance. We made the deliberate decision that the competitors were not allowed to try out the fire service robot beforehand; they were expected to use it without any prior training. This is something that would never happen in a real firefighting operation, of course. Nobody is allowed to use any equipment during an operation without the appropriate prior training. 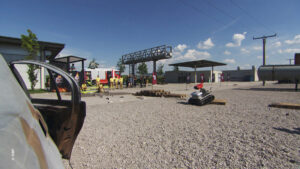 The most obvious use was to deploy the fire service robot in a fire scenario. This will certainly be one of the most important applications of such products for fire services. The first couple of operations using comparable devices have already been undertaken, for instance during the Notre Dame Cathedral fire.

Operations in and around fires pose a major source of danger for emergency services. Only if it is deemed absolutely necessary – for example in rescue and extraction missions – will fire crews enter a burning space. Otherwise, every effort is made to extinguish the fire quickly and efficiently from a safe distance with the greatest possible degree of self-protection. Of course, a fire-fighting robot offers many advantages in this respect. It can be controlled by a single operator and can get an accurate view of the situation from a safe distance thanks to its built-in cameras. 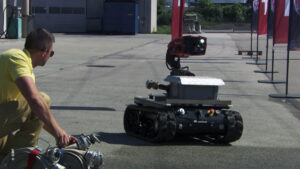 The final course involved two individual competitors facing multiple challenges, which made quick reaction particularly difficult. This in spite of the fact that they had already won an elimination round against another two competitors.

The first part involved driving through a slalom course. This proved particularly difficult because the operators were assigned a fixed location, which meant they had to guide the fire service robot towards themselves. That is precisely what made controlling the vehicle so tricky – left was right and right was left 😃. It can get quite confusing. Model airplane and drone pilots are quite familiar with this problem! 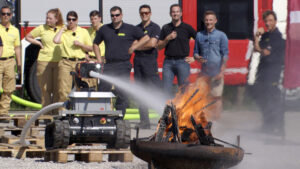 After the water hose was connected, it was on to the second part of the course – approaching the burning object. The challenge of driving over wooden pallets was that the pallets were just as big as the fire service robot itself, meaning that it had to be controlled very precisely. How successful they were in doing this can be seen in the show 😉.

The final goal was achieved by both teams – the mission was successfully completed! 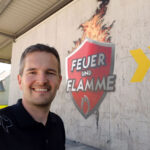 For me and ‘Raupi’, these were exciting days in the Lower Austrian Firefighting and Safety Center in Tulln, because it was a rare opportunity to have such a behind-the-scenes insight into a major primetime show.

I’ll be keeping my fingers crossed for all finalists battling for the title of Austria’s Best Firefighter.