The Logical Outcome: The AT in its Third Generation.

6 minutes read
Previous Next
The Logical Outcome: The AT in its Third Generation.

A key constant in the AT’s success story is continuous change. The AT concept has always been subject to further development. Resourceful technicians, sales staff, purchasers, and other employees adapt the concept to market requirements and integrate technological advances into the AT. The sales figures prove that this strategy of continuous change, which is based on stability, is the right one: by 2020, almost 6,000 ATs are deployed across the globe.

The AT is now available in its third generation. The starting signal for this further development of the AT2 was given in 2007. At Interschutz 2010, the result of the new developments was proudly presented to the public. The technological refinements and the design caused yet another sensation. 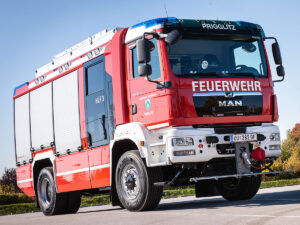 Rosenbauer AT3 from 2019 / Customer vehicle

The 3rd generation boasts 90 innovations that offer customers even greater safety and functionality than the previous generations.

The increasing market acceptance of the AT made investments in shaping tools profitable. With these new possibilities, the body concept could be further improved and the weight reduced even more. For the first time, water tanks with volumes of up to 7,500 liters could be installed. Countless detailed solutions contribute to the optimal use of space.

A profile system that can be adjusted with millimeter accuracy was used to fasten shelves, transverse walls, etc. A one-hand unlocking system was developed for the 3rd generation, which allows equipment to be removed quickly and safely. A consistent color concept also supports the team in the intuitive operation of the vehicle. All parts of the crew room and equipment rooms that are designed to be “touched” are colored orange as standard. 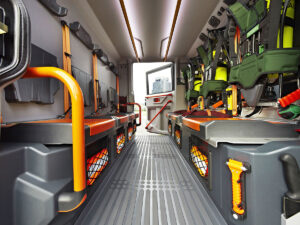 Handles and seat belts in orange 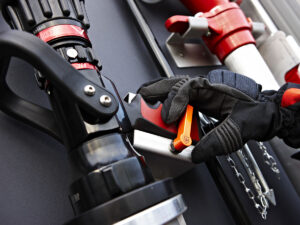 The AT3 is also a great space saver. Thanks to a new docking system between the body to the cab, more space was created in the crew cabin. The integrated double cabin is also completely glare-free thanks to the use of indirect lighting. The seats offer lateral support and can be equipped with 2-point, 3-point or split seat belts and belt tensioners. The AT3 can also be optionally equipped with rollover side airbags. The glass doors of the crew cab create better lighting conditions inside the cabin and provide a clearer view of obstacles in the vicinity of the vehicle before exiting.

Once at the scene of the operation, the driver presses a button and the vehicle is secured. Depending on the programming, the scene arrival button automatically switches off the flashing lights and the siren while turning on the ambient lighting, the hazard warning lights, and the traffic control system.

The extinguishing technology of the AT3 “thinks” with you. A so-called “central water axis” automatically takes over the logical distribution of the water to where it is needed: to the tank, to the pump, or to both at the same time. Regardless of whether water is sucked from a dirty pond or fed by a portable pump or from a hydrant, the water supply can always be connected to the central water axis in a user-friendly manner. This convenient solution applies whenever no open tank inlet is required by law. However, the AT would not be the AT had Rosenbauer not developed a unique, innovative solution for this requirement, with an optimal solution provided for the customer within the framework of the legal regulations.

The AT3 has a suitable built-in pump for every need. All pumps can be equipped with a Rosenbauer FIXMIX admixing system. Pressure proportioning systems such as the DIGIMATIC are also available for installation in the AT3.

The central water axis, the pumps, the admixing systems, and the extinguishing water tank form an integrated, coordinated, and efficiency-optimized system.

Further development also continued in the sphere of control technology. The Rosenbauer LCS 2.0 (Logic Control System) is based on CAN-bus technology, has a modular structure, and allows even complex processes to be clearly and comprehensibly displayed or safely controlled. There are different sized displays, different key fields, and operation via a rotary knob.

Another innovation that Rosenbauer managed to implement for the first time in the AT3 is the traffic guidance device that can be integrated in the rear, by which traffic cones can be placed automatically.

LED technology is used throughout the AT3. Large flat-beam LEDs are used for illuminating the surroundings. Powerful wide-beam LED spotlights are used as headlights. The equipment rooms are illuminated by LED strips, while the crew room is illuminated by indirect LED lighting.

Made in Austria and Germany, Valued Worldwide

The AT is designed in such a way that it can be manufactured very efficiently in large quantities using line assembly. In addition, it is specifically this type of industrial production that enables Rosenbauer to guarantee quality standards.

The AT3 is manufactured at two locations: both at the Rosenbauer headquarters in Leonding and in Luckenwalde, Germany. Production of the AT in Luckenwalde began with the AT2 and continued with its successor. In 2014, the production in Austrian moved from Plant I to Plant II in Leonding and has utilized the possibilities of line production according to the latest industrial standards ever since.

The AT has a strong presence in its core markets of Germany, Austria, and Switzerland, but also has customers in export markets across the globe. AT vehicles are now in use in 44 countries around the world.

Where is the AT heading?

The AT is certainly not a has-been. And ongoing further development will not stop in 2020, either. True to the motto “Evolution instead of Revolution”, the concept continues to integrate proven, meaningful technologies and confidently faces the current needs of the markets, trends in society, and the requirements of legislators. Change is progressing steadily and constantly…

In our video series you can learn more about the development of the Rosenbauer AT.

›› Complete video playlist on “25 years of the AT”

Peter Hutterer is responsible for making Rosenbauer's "little vehicles" (AT, ET, CL) fit for the big, wide world. To keep them "healthy" throughout the product lifecycle, he strategically brings them back on track and injects them with a bit of Rosenbauer's mechatronics DNA.