The IPCC Science Council (Intergovernmental Panel on Climate Change) outlines that the changes in our earth’s atmosphere are predominantly caused and driven by human-generated greenhouse gases, such as CO2, methane, nitrogen oxides, halogen gases or volatile organic compounds and carbon monoxide. For this reason, legislators are imposing strict, low fleet CO2 limits for one of the most significant CO2 emitters, the mobility sector, so that the automotive industry is now also taking a drastic swing in the direction of electric and hybrid power trains. Many manufacturers have already published complete changeover scenarios to these types of drives by 2030/35.

With the increase in battery-powered electric vehicles (BEVs, HEVs and PHEVs) on the road, statistically the risk potential for an accident or technical defect of the inherently safe battery systems also increases. Until now, extinguishing escalating systems was not manageable for emergency crews with the appropriate means and entailed many unknown factors. For this reason, Rosenbauer set itself the goal of better understanding the issue and researching practical new approaches to fire de-escalation, thus ensuring safe rescue modules for emergency crews.

Each battery package consists of several modules, which in turn consist of several cells. The cell as the smallest element consists of an anode, a cathode and an insulating separating layer, the separator. In Li-ion batteries, a liquid electrolyte often serves as the conductive agent. The Achilles’ heel of a battery is the separator, which is made of plastic and has only limited temperature resistance. If the cell is damaged (mechanically, overcharging, external heat), the separator breaks and a short circuit occurs, releasing all the stored energy (electrical as well as chemical) in the form of an enormous heat build-up, the so-called thermal runaway, followed by a fire. This heat damages the neighboring cells and a chain reaction occurs. In this state, extinguishing from the outside is not possible. The spread of the chain reaction can only be slowed down or stopped.

Since the current systems and measures on the market did not seem practical, neither in terms of the water resources used nor the glaringly higher deployment times and, in some cases, costs, the Rosenbauer team, after extensive battery escalation analysis, developed an extinguishing system that can slow down and stop the chain reaction in the shortest possible time. 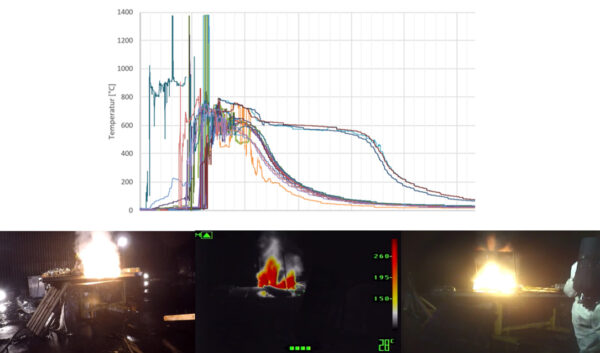 Temperature recording from battery escalation through to de-escalation

In the temperature diagram, the temperature curves inside the battery were recorded at different points and show the escalation and effective de-escalation of the process. The corresponding external effects and thermal images can be seen below this.

In a large number of preliminary tests with different battery types, an understanding of the escalation was gained through comprehensive measurement analysis. This was the basis for being able to achieve an effective and direct cooling methodology.

In order to be able to understand the different battery architectures and their escalation behavior across the board, these fire tests were carried out with a wide variety of battery types from the automotive market leaders, and a common denominator was developed for the technical extinguishing unit.

In collaboration with well-known waste management companies, it was also necessary to analyze the conditions of the partially damaged and discharged batteries, and to understand how to achieve the lowest possible impact from the subsequent raw material recycling of the residual cells.

In addition to the understanding of battery escalation behavior, the research results produced a very effective, resource-saving and safe extinguishing system approach, which will be available to emergency crews after an extensive lead user testing phase.

Head of Innovation Technology and Research