2 minutes read
Previous Next
The E8000 for Australia

With the introduction of the new Super Jumbo Airbus A-380 in 2004, a whole new set of challenges was thrown to the Airport Fire Fighting Crews at major airports served. Besides the massive dimensions and fuel loads, one new challenges was the increased number of passengers to be evacuated in case of emergency.

Even during the A-380 certification test with the maximum number of 873 participants, some serious injuries were reported. In regular, “real-life” evacuation during a major incident, a much higher number of injuries can be expected, as average passengers are generally not prepared to suddenly slide down more than 8 meters in possible bad weather conditions.

To minimize the number of passenger injuries and to be able to remove an aircraft as fast as possible from an operational runway without removing deployed slides, Rosenbauer and one of its key customers, Changi Airport Emergency Services developed together in 2005 a new product. This new product, called the Rosenbauer E8000 Escape Stairs, was designed to enable Airport Fire services to perform a rapid evacuation without using emergency slides and also to provide the fire services safe and quick access to the aircraft interior. During the Qantas QF32 incident the Changi E-8000 was put to the test and prevailed with excellence.

In 2016, Airservices Australia (ASA), the airport fire rescue service provider for civilian airports in Australia decided to upgrade its capabilities to serve the growing number of A-380 aircraft operating at its major airports. In a very close cooperation between ASA and Rosenbauer, the vehicle has been designed according to the operational needs of ASA. The vehicle includes a hydraulically driven fire pump and a water tank to provide independent fire fighting capabilities.

The E8000 Escape Stair, mounted on a MAN 6×6 chassis has been introduced at Melbourne Airport Fire Rescue Services in late 2018. It is the first E8000 operating in the southern Asia Pacific area. 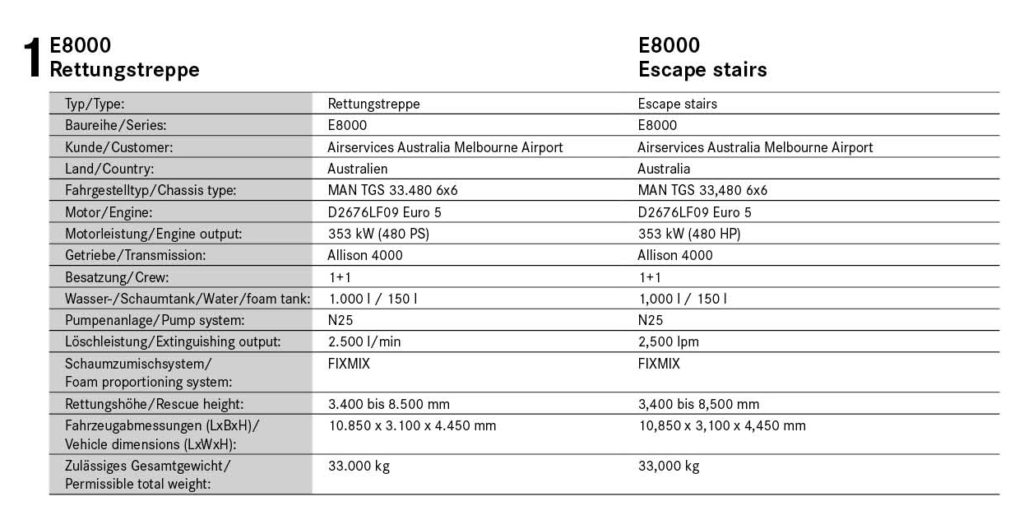 About the Author: Herbert Pöllinger