Touring the US and Canada: The CFT in North America (Part 1)

4 minutes read
Previous Next
Touring the US and Canada: The CFT in North America (Part 1)

In the last couple of months the Concept Fire Truck was on the road in the US and Canada to present its innovative technology to fire departments across North America. 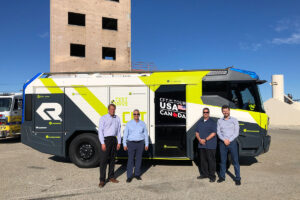 Along the West Coast

We started in California in Ventura County, where the CFT awoke well after 4 weeks “asleep” on a ship. The next stop was Los Angeles, where we were received with open arms and were escorted by L.A.P.D. to drive with the Assistant Mayor of L.A. and Fire Chief on the L.A. Dodgers Stadium parking lot. This was one of our most important visits, as we had received a delegation of LAFD and our regional dealer Velocity in Leonding in the summer of 2019, and they were excitedly awaiting the arrival of the CFT.

After an energetic and very positive demonstration, the travel continued. Onwards to Santa Barbara, after which we travelled to the Heart of Silicon Valley, Menlo Park, and were literally around the corner where Tesla first started. It was very surreal to be 900 meters of where this now iconic game changing start-up initiated, as well as the world’s center of big Digital data. Which of course is part of the CFT philosophy. We had two days planned, which turned into three, such was the amount of interest from the fire crews and the public. 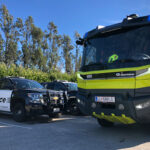 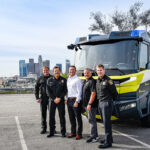 The CFT in LA: The Los Angeles Fire Department was one of the first fire departments to see the CFT up close. 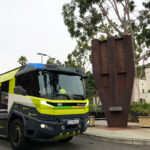 The CFT next to the 9/11 memorial at the LAFD training center. 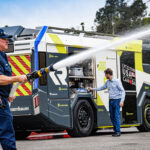 The demonstration of the CFT in LA was a huge success.

The adventures we had there are worth its own book. The Rosenbauer Fire Service Robot, that was nicknamed “Raupi” by the product development team or “Wally” as we came to name it, also came to help the CFT when it had that one bad day… As is usual with concept studies, not all goes according to plan, but after assistance from Menlo Park tech staff, a Tesla employee, we were able to replace a fuse and continue the journey.

Then the tour went on to San Francisco and Santa Cruz, where the CFT would have liked to dip its tires into the Pacific Ocean. The next stops were Fremont and Modesto, where the Concept Fire Truck spent a quiet Christmas with family: a commander pumper from Rosenbauer America. 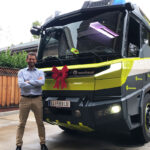 The CFT was getting in the mood for Christmas in Menlo Park. 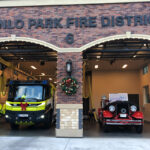 Off to the cold

In January, we started up cheerfully and visited the colder areas. The CFT was facing cold rain and snow – all the opposite of California – but it did not complain and diligently kept going, and the reception it was given was not the least bit less warm than during the first leg of the tour.

We started in Eugene, Oregon, where the CFT put out its first (small wood) fire ever. Then to Tacoma, Seattle and east Side in Washington State. The land border crossing into Canada went very easy thanks to all the colleagues at Rosenbauer America in the background.

We spent four extremely rainy and cold days in Vancouver and North Vancouver. The CFT faced its first wood fire in Eugene, Oregon. 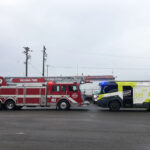 Back to warmer climes 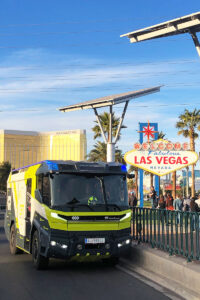 Then it was time to move a little further south again, to a warmer and sunny city in the middle of the desert: Las Vegas.

Arriving in Las Vegas was of course an experience on its own, even during the daytime, the Las Vegas Strip, the nickname for Las Vegas Boulevard, is impressive with its giant casinos and hotels. BUT: at night, it transforms into a kaleidoscope of millions lights and sounds.

Las Vegas F.D. was very seriously interested in the Philosophy behind the CFT technology so much that we are going back to the Las Vegas Firehouse World trade show at February after which we will even have a meeting with City Council to explain the WHY behind the firetruck of the future.

This part of the tour was programmed in Phoenix, AZ. I drove with our driver Rick on the Flatbed transporter with the CFT 310 miles from Las Vegas to Phoenix. One of the most beautiful drives to date. Crossing Hoover Dam and the desert scenery are beyond words.

We finished our tour in Phoenix, where we had a two day demonstration, we met with State senators, the fire Chief, elected officials and of course many, many Battalion chiefs and fire fighters. 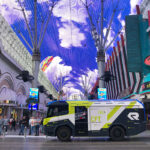 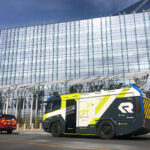 We are looking forward to presenting the CFT to the City Council during the Las Vegas Firehouse World trade show in the end of February. The CFT on Arizona Road. The last stop of the first part of the tour was in Phoenix, Arizona.

The Concept Fire Truck was on the road in North America for several weeks, from the December 3rd to 23rd, 2019 and from January 11th to February 2nd, 2020. Stay tuned for more, as the CFT tour will be continued.