When firefighters respond to a call they need a vehicle capable of high speed, rapid acceleration, hard braking, and maneuverability. The driver must have focused concentration, strong nerves, and experience. The Concept Fire Truck (CFT) is a showcase of cutting-edge technology. Its special architecture, paired with independent suspension and a hydropneumatic chassis, has enabled a new level of driving performance and safety.

Each axle is powered by an electric motor with 180 kW (240 hp) peak output and 425 Nm of torque from a standing stop, giving the CFT plenty of power. Although it weighs up to 18 metric tons, it matches the acceleration of the PANTHER 8×8 and has a top speed of 110 km/h.

Rosenbauer engineers were able to lower the CFT’s center of gravity by more than 20 centimeters compared to a conventional truck. They also succeeded in achieving axle load distribution of nearly 50/50. The optimal setting for the independent suspension was determined in numerous dynamic driving tests, resulting in ideal diagonal twist, roll-over stability, and driving stability while fulfilling all common standards. 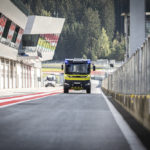 CFT in the pit lane of Red Bull Ring in Spielberg, Austria.

With these specifications, the concept truck drives more like a large sports utility vehicle and less like a conventional commercial vehicle. This gives the driver the ability to reach the destination not only quickly but also with significantly higher safety, especially on curvy roads and when hard braking is required. The CFT is the first commercial vehicle to take advantage of ESC, which makes a major contribution to its driving performance and represents another important step towards greater safety in extreme situations.

The impressive performance of the CFT was demonstrated during the Krone E-Mobility Play Days event in Spielberg, including lane changes at 70 km/h. Such capabilities made the CFT the public favorite at the E-Mobility exhibit at Red Bull Ring in Austria. 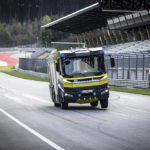 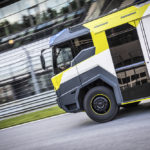 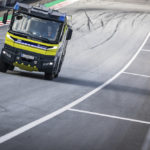 About the Author: Michael Friedmann