In the last part of the blog series “Safety mission for aircraft rescue and fire fighting vehicles,” the topics of vehicle stability and driving dynamics were examined in more detail. In this part, we focus on the measures affecting the cab and the assistance systems.

Safety for that moment when everything has to work perfectly.

A real emergency operation is an extreme stress situation for the fire crews, even with routines and regular training  At the airport, it is necessary to react within the shortest possible time. The operators of an ARFF vehicle must be able to apply large quantities of extinguishing agent in a targeted manner at any location on the airport site in the shortest possible time. It is the task of the vehicle to ensure maximum safety in this one moment of action and to allow the operator to focus on the action without any restrictions. 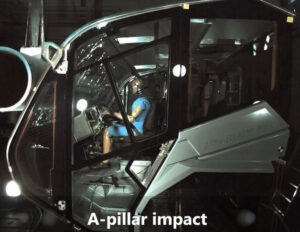 Test of the load capacity of the A-pillar structure

When the new PANTHER was presented to the general public at Interschutz 2015, a large number of innovations were revealed with the vehicle. The main focus of development was the topic of safety. The basis of every (fire fighting) vehicle is the fulfillment of rules and standards. In terms of occupant protection, the cab was already developed in anticipation of the requirements of ECE R29/03. The PANTHER cab was the first cab of a typical ARFF vehicle to meet these requirements, including crash test.

The crash test requirements consist of three different test scenarios. The cab must withstand a simulated frontal impact in the form of a pendulum blow to the cab front. The load capacity of the A-pillar structure is tested by a further pendulum impact on the windscreen. Finally, a rollover of the vehicle is simulated in the form of a side impact and a static roof load of 10 tons.

In addition to basic safety, passive safety systems in the cab can protect the occupants of the cab in the event of an accident. The most likely ARFF vehicle accident is a roll-over. Special roll-over airbags have been integrated into the cab for this scenario, to provide additional protection for the occupants if the vehicle overturns around its longitudinal axis. A sophisticated system measures dynamic parameters and the tilt angle of the vehicle. If a critical threshold value is exceeded, a belt tensioner acts first, so that the total deceleration is transmitted to the vehicle occupants and they automatically assume the correct seating position.

The airbags then deploy at the wheelhouse positions and can provide additional protection for the occupants in this area.

Total focus on the damage scenario and surrounding risks.

An essential safety element is sometimes forgotten in external communication. One of the most important safety factors is the crew’s complete focus on the approach route and on the operational scene. The PANTHER cab has been significantly optimized in this important area. The operator and his or her requirements were placed at the heart of the development.

First, care was taken to improve the visibility to the outside. Dangers that can be detected quickly can also be avoided. True to this motto, the control panel and the A-columns were designed to be as narrow as possible. The glass surfaces have been enlarged, thus improving the field of vision, especially in the lower left and right areas. The narrow A-pillar further improves the all-round view. 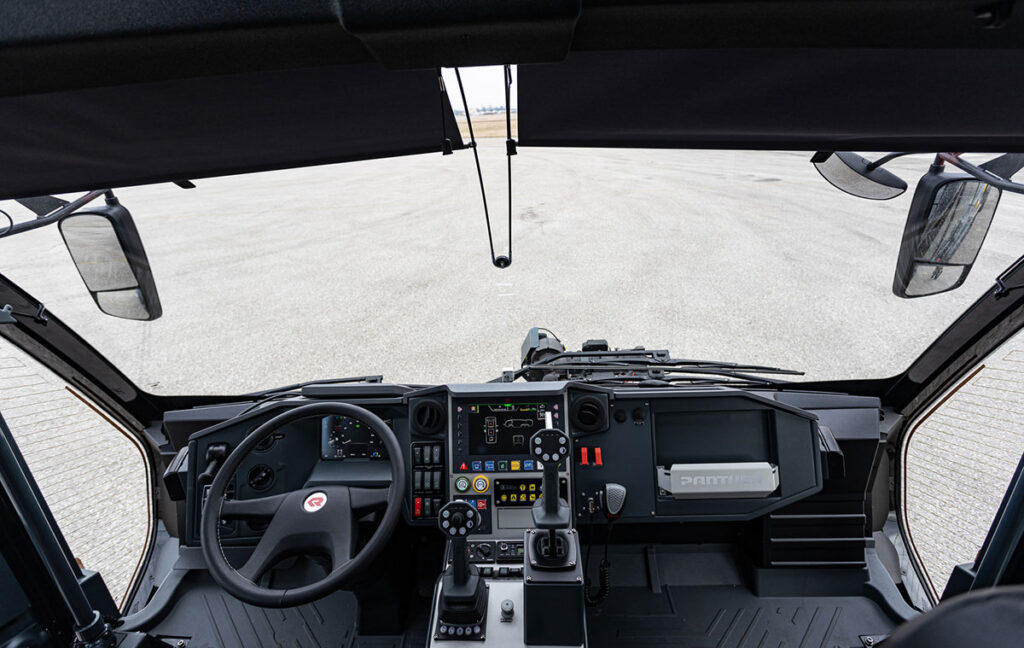 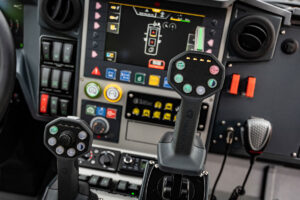 The factors influencing the operator of an aircraft rescue and fire fighting vehicle are extensive and increasing. In addition to getting to the scene in the shortest possible time, the extinguishing system and the radio or communication equipment must be operated. For this reason, operation has been reduced to a few important control elements. This is supported by a central display, which provides additional information for the fire fighting operation. However, important control elements were arranged in a large and prominent way. The pump can be started immediately in water or in foam operation function buttons in the center. Essential information is shown directly on the joystick or control handle. Both the extinguishing medium used – water or foam – and the current flow rate is displayed. Less is more in this case, which ensures operational safety even in the most stressful situations. 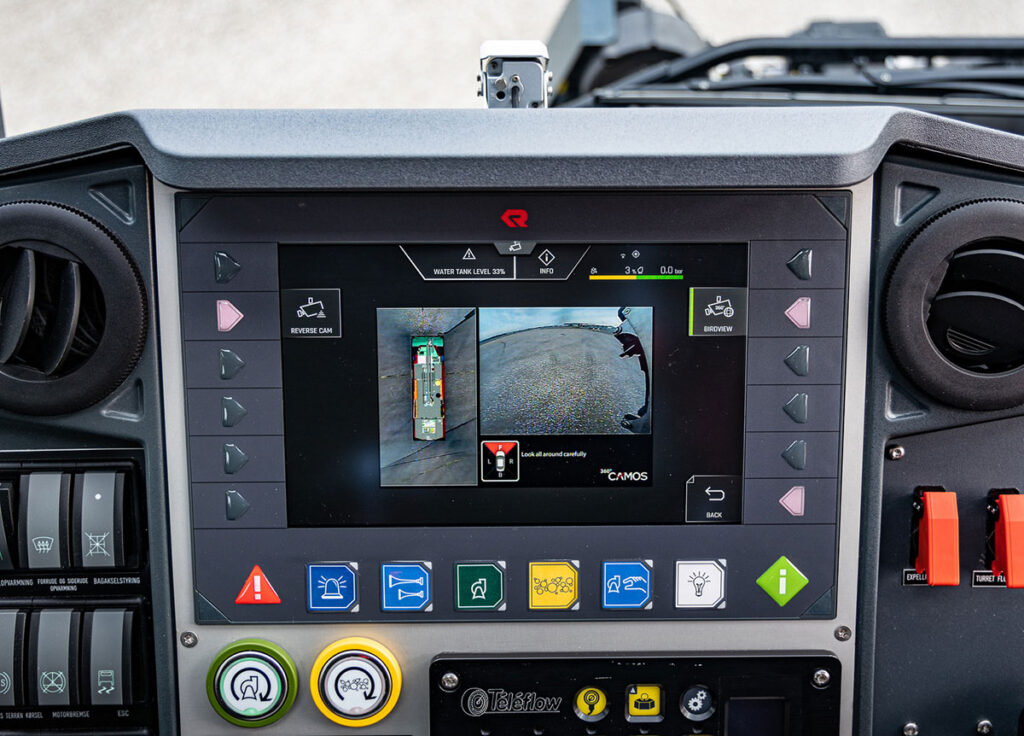 Another factor that should not be overlooked is noise in the vehicle. Noise distracts the driver and reduces the performance. In addition, studies have shown that loud noises impair the ability to orientate oneself in the field and even temporarily reduces visual perception. In addition to the general noise caused by the rolling sound of the tires and the vehicle engine, in an ARFF the pump is an additional source of noise when approaching. Added to this is the noise generated inside the cab by means of communication, such as radio transmissions. Rosenbauer has addressed and optimized exactly this problem during the development of the new PANTHER.

The recipe for success lies in the reduction of vibration transmission into the cab, as well as measures in the cab itself. A special suspension of the cab and the pump unit reduces the transmission of vibrations into the cab. Rolling noises are minimized by a special construction of the wheel housing. A rear cab wall of sandwich panels also reduces pump noise. The cab interior was fitted with additional sound-absorbing elements, such as a roof lining and floor mats in the cab floor area.

Assistance systems as an additional add-on.

New technologies can also provide additional safety. Modern driver assistance systems, such as a “Birdview” system make it easier and safer to handle confusing driving situations. A Birdview system is a camera system consisting of four cameras, which are distributed around the PANTHER. The image information from these cameras is combined to form a virtual image in the central display of the PANTHER and simulates a camera view of the vehicle roof and surroundings (bird’s eye view). Such a system can minimize the risk of overlooking people and obstacles around the vehicle. 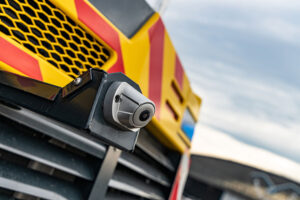 Birdview camera positioning around the vehicle 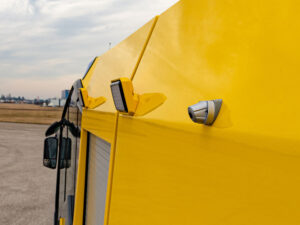 The EMEREC DEVS information system can provide additional safety even in poor visibility thanks to the specially developed navigation solution with thermal imaging visual support. A FLIR thermal imaging camera improves visibility, for example in smoke, fog, or darkness. The camera image is displayed on a screen in the vehicle. 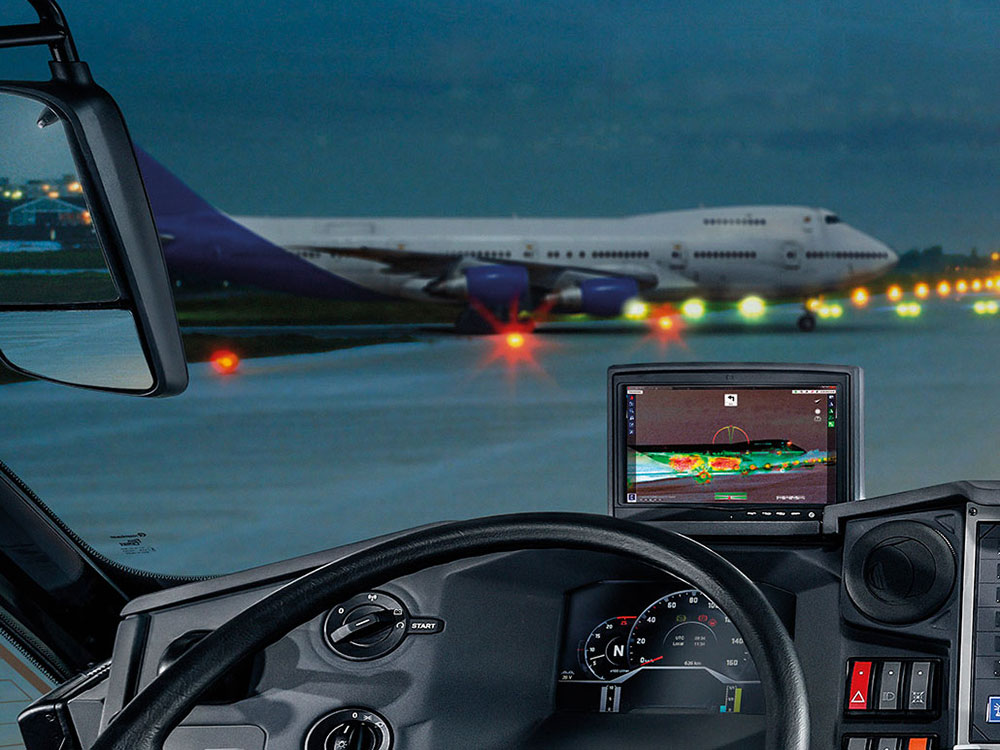 As explained at the outset, Rosenbauer’s aim is to provide the vehicle operator, i.e., the emergency crew, with the perfect framework for operations. Human and machine must form one unit in the moment of an emergency. Operators must be afforded safety, so that they can save the lives of others without putting themselves at risk.