Safely through the tunnel

3 minutes read
Previous Next
Safely through the tunnel

Road tunnels reduce the time we have to spend in the car many times over. Instead of driving for miles over or around mountains, we can simply drive through them within a few minutes. Nevertheless, some people often have a queasy feeling about it: a thin tube leads through tons of rock and turning around is not an option.

To keep the risk of accidents in tunnels low, special rules often apply: speed limits, passing restrictions, and lanes without oncoming traffic. However, accidents or vehicle breakdowns can never be completely ruled out. And if this results in a fire, the consequences can be devastating. Therefore, the installation of efficient and easy-to-operate extinguishing systems is essential for safety in tunnels.

In tunnels, small fires can quickly develop into large fires that are difficult to control. Temperatures rise extremely rapidly and can reach over 1,300 °C (2,370 °F). The resulting heavy smoke not only reduces visibility, but is also life-threatening. Escape possibilities are limited, especially in older tunnels where there is no parallel tube for escape. For this reason, rapid intervention is essential as the fire develops.

Efficient extinguishing right from the start

Tunnel protection systems from Rosenbauer are installed in niches along the tunnel tube and are available throughout the tunnel. The extinguishing system is designed to be particularly easy to operate by first responders, i.e. by all those people who are traveling in the tunnel. Thus, no vital minutes are lost until the arrival of the fire service, and the fire can be fought in its initial stages. 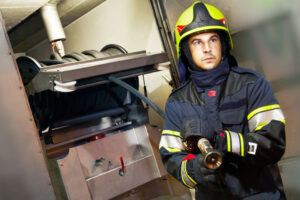 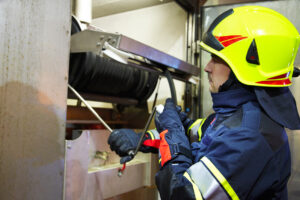 The tunnel protection system RPE Tunnel is connected to the water supply, which means that an unlimited supply of water is available for extinguishing. To be able to extinguish liquid fires (such as burning petroleum or diesel), foam compound is added to the water.

The extinguishing system is activated in three simple steps:

The extinguishing agent can then be applied to the seat of the fire. Throw ranges of up to 25 m (82 ft) allow the operator to maintain a safe distance from the fire.

Over 500  of these systems have already been installed in Europe.

How to behave in the event of a tunnel fire

If there is smoke or fire in your own vehicle, you should park it in the breakdown bay, if possible, as this is usually where the extinguishing systems are located. Otherwise, park on the hard shoulder or on the right-hand lane (for countries where the driving direction is the right side) so that emergency crews are not obstructed. In the event of a small fire, an attempt should be made to extinguish the fire. In the case of large fires involving several vehicles or trucks, the nearest emergency exit should be sought directly.

In 2011, Elke Pantazis immersed herself in the world of preventive fire protection. Since then, she has been working with her colleagues to develop innovative products and extinguishing system concepts. Her focus is on communicating complex solutions for different application scenarios in an easy-to-understand way.