Rosenbauer in Japan: A personal journey into the past

7 minutes read
Previous Next
Rosenbauer in Japan: A personal journey into the past

If, as a newly hired employee, you are asked to see the management in their office after just two weeks, this creates a lasting memory. And it really seems to me like yesterday that the technical director at that time, Dr. Helmut Gumbsch, in a brief conversation, entrusted me, the recently hired university graduate, with the task of certifying the first airport fire truck that Rosenbauer ever delivered to Japan in accordance with Japanese standards and regulations.

A milestone in airport construction

Kansai International Airport was still under construction in July 1992, and was seen as a milestone in the development of air transport. The possibilities for expansion of the old Osaka-Itami Airport had been exhausted due to the city growth around the airport, and the decision was made to build an artificial island for the new Kansai Airport in Osaka Bay.

The construction literally broke new ground. A concrete ring formed a boundary for the island, and this was then partially filled with iron ore and gravel, on which were to be situated the terminal building and traffic areas such as runways and taxiways. The settling of the fill was foreseen during the planning phase, so the approximately 1.7 km-long terminal was placed on adjustable stilts, which could individually compensate for the changes in the substrate.

A true milestone in airport construction! Something that Japan – with its reputation as a high-tech country – was of course particularly proud of. When the issue of purchasing appropriate airfield fire engines for the new airport arose, efforts were naturally made to obtain the best of what was technically feasible at the time.

Technological progress in the foreground

As it was established in 1866, Rosenbauer celebrated its 125th anniversary in the fall of 1991, and used this occasion to unveil the new PANTHER series to the public. Our Japanese sales partner Teikoku Sen-I (Teisen) was also invited, and immediately realized that the PANTHER was now the technological leader in the branch of airfield fire trucks.

Its potential for Kansai Airport was clearly established. The mission was to ensure that the most technologically advanced airport received the most technologically advanced fire truck. Teisen and the responsible Rosenbauer sales team signed the contract for the delivery of two PANTHER 6x6s to Kansai International Airport in Osaka in June 1992. This caused a degree of alarm among the highly advanced local manufacturers in Japan. It was the first entry – and a particularly high-profile one at that – of a foreign manufacturer into the Japanese airport industry.

To ensure that this new vehicle really did comply with the strict Japanese regulations, it was clear from the start that the vehicle had to be checked and certified down to the last detail. To ensure this, the customer commissioned a Japanese test institute that specialized in firefighting equipment. My job from now on was to coordinate these certifications between the various departments of Rosenbauer and the Japanese institute.

Testing down to the smallest detail

Certification and testing then took place in two stages. The first step – before the actual construction of the vehicles – was certification of the individual components in accordance with Japanese fire service standards. The second stage was the homologation and, finally, the acceptance tests of the completed vehicles prior to delivery.

The first tests began on November 18, 1992. Why can I still remember the date so clearly? On November 17, 1992, I became a father for the first time, so coordinating my time between the high number of test engineers from Japan and visiting my young family in the hospital was a challenge that I remember well. 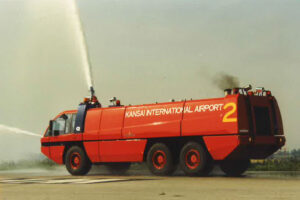 The first two PANTHER 6×6 for Japan were thoroughly tested.

The tests took almost five weeks, with everything being inspected down to the smallest detail. Endurance runs lasting up to three days for pumps, suction pumps and drive motors, performance tests of the pump and foam system, sometimes up to the physical limits of the components, and disassembly into individual parts, including measurements, was all required. All tests and checks were passed with flying colors.

The test engineers not only brought their own measuring devices from Japan, but they also received a crate of Japanese food from our partner. They wanted to make sure that the Japanese guests felt as comfortable as possible in the planned period of weeks away from home, because a permanently hungry test engineer might have posed a problem. However, they soon discovered that Austrian food is quite palatable, and the Japanese ready meals remained almost untouched.

But the hard work and positive cooperation with the customers and partners paid off, as the flattering words of the very experienced chief test engineer attest:
“We left Japan for Austria with the aim of proving that manufacturers who do not come from Japan cannot meet the strict Japanese standards and certification requirements. We have now spent five weeks at Rosenbauer with some of the best people in the fire service industry, and today we can say that Rosenbauer not only meets the strictest requirements, but that the products we have tested are the best that we have ever examined in our test engineering career. We thank you for this experience and we will tell everyone in Japan how good Rosenbauer products are!” 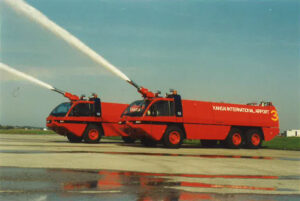 In 1994 the two PANTHER 6×6 were put into service at Kansai International Airport in Japan.

The following year, the two PANTHERs were again put through their paces as completed vehicles. These acceptance tests lasted a total of six weeks and were also passed with great success. The vehicles were delivered in the fall of 1993 prior to the completion of Kansai International Airport. The airport opened on September 4, 1994, and the two Rosenbauer PANTHER were the heart and pride of the newly established airport fire brigade.

Both PANTHER served well for many years, and the brigade grew highly attached to them. They were in continuous service for more than 18 years. When it was time to retire the two PANTHER, the decision was made to retain an RM 60 E monitor in the firefighting museum as a memento. During an official visit by a Rosenbauer employee to Kansai International Airport in July 2017, the monitor was taken out of the museum and, during a large ceremony, transferred to a religious shrine, a sign of gratitude from the firefighters for the valuable service that the Austrian vehicles performed for many years. 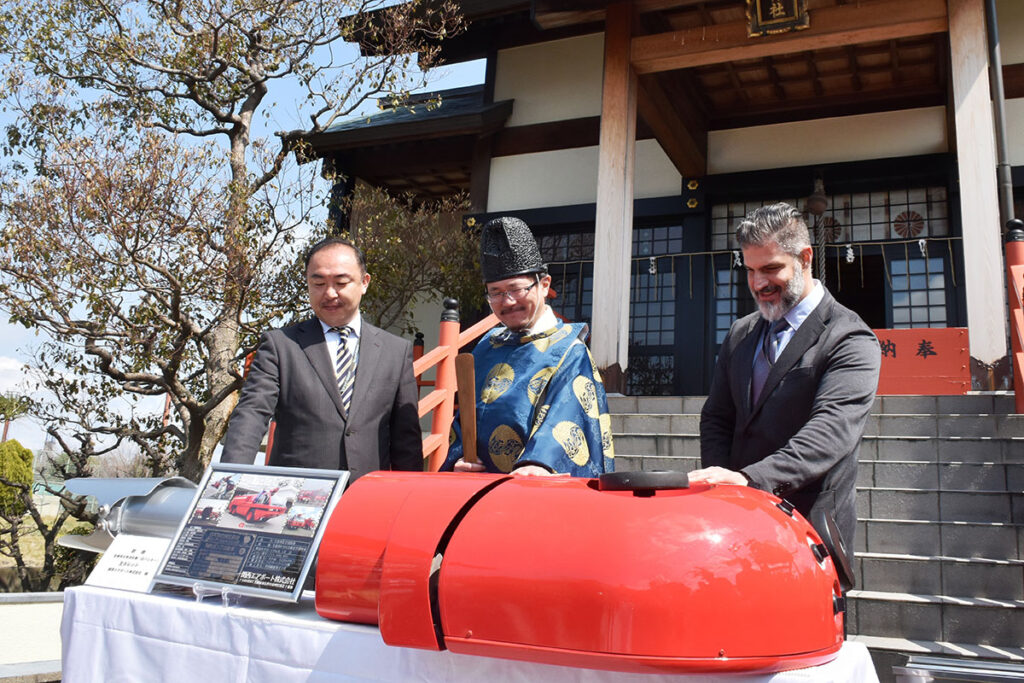 In 2017 the main turret of the first PANTHER, the RM 60 E Monitor, was dedicated to the Senshu Aviation Shrine that has aviation museum that exhibits aircraft parts and aviation-related materials. 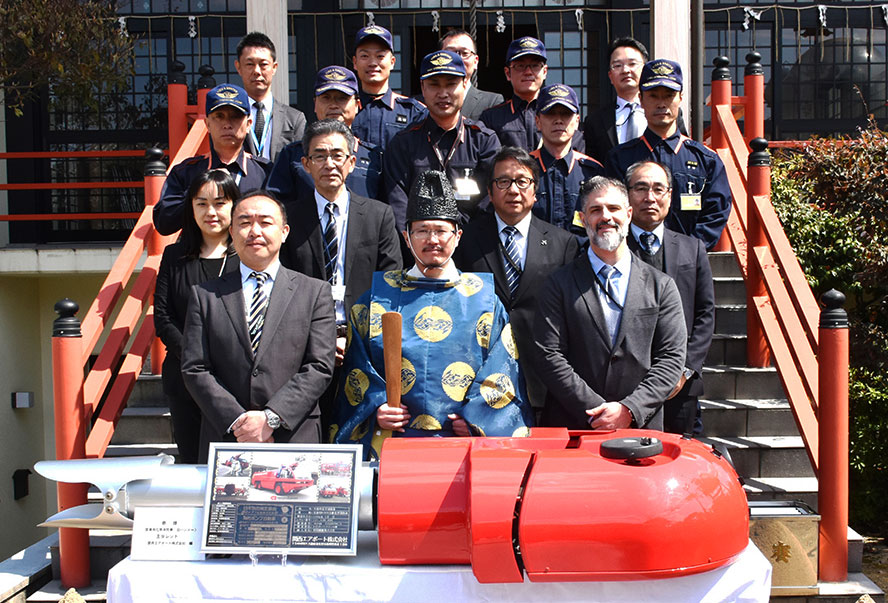 The Senshu Aviation Shrine located near Kansai International Airport was established during the early stages of construction planning for the airport to pray for safe aviation and travel.

I’m now quite a few years older than I was back then, and have overall responsibility for Rosenbauer activities in Asia and the Pacific. It fills me with pride when, after many years, we are able to look back on a very successful market entry for Rosenbauer and, above all, a product that our customers so highly value. After all, the great performance of so many Rosenbauer employees has thus far resulted in the delivery of over 100 PANTHER to Japan. 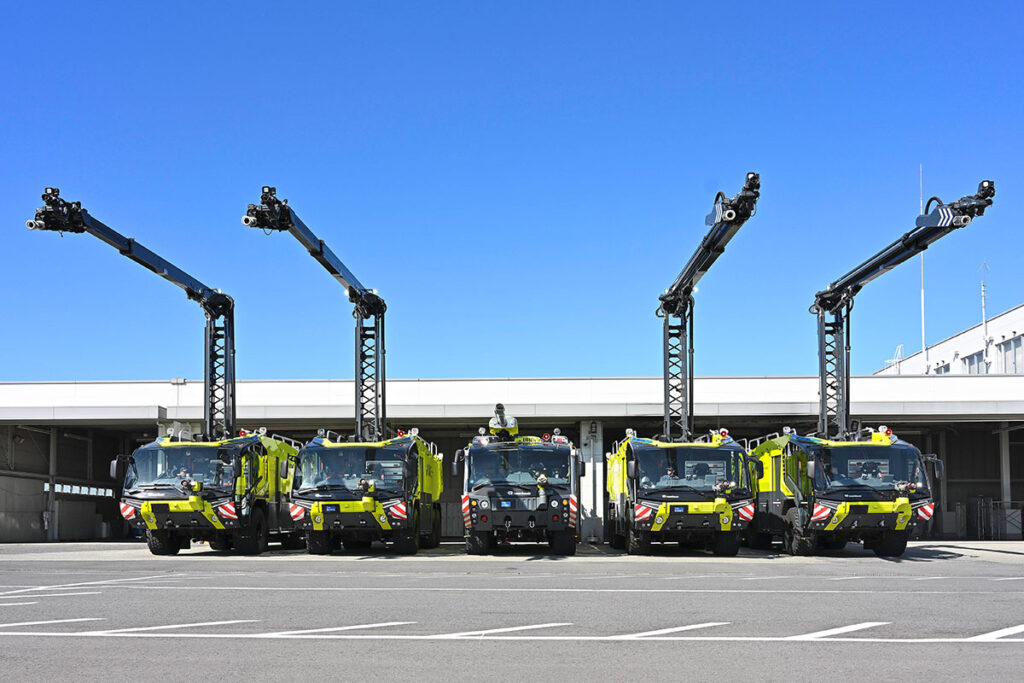 "A little experience never hurts," is Herbert Poellinger's motto. Since 1992, he has been getting to know the various departments at Rosenbauer at first hand, from development to design engineering and production, right through to sales, and has helped to shape them. After a stopover at Rosenbauer America in Minnesota, he is now responsible for Rosenbauer's largest market in terms of area and population: the area Asia/Pacific.