Quantity vs. Efficiency – Contradiction or Complement?

4 minutes read
Previous Next
Quantity vs. Efficiency – Contradiction or Complement? 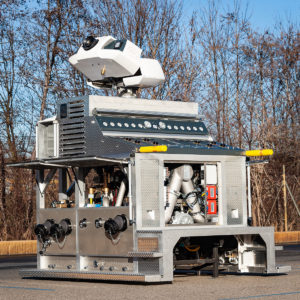 “Application ratio kills the fire” is often the primary argument put forward by American industrial fire departments. This equates to the number of liters of extinguishing agent applied to a surface over time. However, while this basic truth cannot be dismissed outright, there are also other aspects to be considered, such as water supply, water storage, soil contamination, water damage, and so forth, that can be given as counter-arguments to the excessive application of extinguishing agents.

If a rescue firefighting vehicle is to be equipped for every municipal application, then an industrial fire truck needs to be equipped for an even broader spectrum of firefighting scenarios and with a wider range of additional equipment. Thanks to decades of experience, Rosenbauer has not only developed all the key components for an industrial pump system, but also provided the highest level of universality in the combination of extinguishing systems. 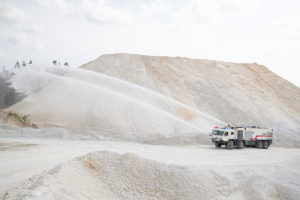 Let’s begin with the new pump family; the N65, N80, N110 and N130. The N130 can pump up to 13,000 l/min – or 3,500 gal/min – of water in suction operation. In combination with the RM130 ChemCore turret with optimized piping, horizontal reaches of up to 140 m are possible. Which brings us to the turrets. The RM35, RM80 and RM130, all with optional ChemCore technology, offer not only long horizontal reaches, but also the possibility of discharging dry chemical powder in the center of the extinguishing jet, thus transporting it over long distances. The possibility of operating the monitor via remote control also means that you can work from a safe distance or from a better vantage point.

However, if only one incipient fire requires extinguishing upon arrival at the scene of the emergency, it can be seen as a great advantage if the entire system does not have to be put into operation, and instead the fire can be extinguished quickly and with less water via a quick attack handline. Then why not benefit from the same technology – prized by municipal fire brigades the world over – in industrial fire trucks? We’re talking, of course, about high pressure. A H5 high-pressure pump allows two high pressure reels to be supplied and is economical in terms of water consumption. IFTs, as industrial fire trucks are often called, tend to have large foam tanks but only small water tanks, as industrial areas usually have a good hydrant network. Specialists also tend to opt for an additional RM15 HP high pressure bumper monitor, from which a jet can precisely target a fire either as a full jet or in atomized form.

Now the foam tank has already been mentioned, but the universal foam proportioning system is also important. IFTs often need to cool objects via multiple outlets while monitors and other nozzles are still discharging foam to extinguish, cover, or smother the fire. For this reason, the possibility of allowing different proportioning ratios across different outlets is a must. The latest generation of the Hydromatic is now based entirely on Rosenbauer’s own foam gear pumps and proportioners. High reliability and ease of maintenance have always been the key characteristics of this series.

For specialists, however, a combination of Hydromatic, N130, RM130 and H5 high pressure pump still doesn’t achieve a sufficient degree of universality. An HRET facilitates extinguishing operations from elevations of up to 20 m. In terms of foam discharge, once again another level can be reached with a CAFS module, for which a robust, belt-driven version is also an inexpensive option.

In short, with the combination of a high-volume pump, high-pressure pump, balanced pressure foam proportioning system and, optionally, CAFS delivered via HRET, ChemCore roof monitor or high/low pressure nozzle, a product family of extinguishing systems that has everything needed for every application is provided.

Andreas Zeller made a name for himself as a "foam pro" during the first years of his career. He was never able to shake off these roots when working on industrial projects in Arabic an North African countries in later years. As Chief Sales Officer, he is responsible for sales and customer service worldwide.