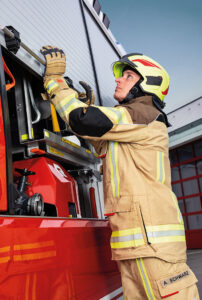 After 15 years, a revised EN 469 was published at the end of 2020. During this period, there have been repeated efforts to adapt the standard and take new circumstances into account – but it is only now that an agreement has been reached at the European level on a uniform new version.

The increasing importance of contamination or decontamination is also pointed out right in the introduction. There is even a separate (informative) appendix for this. In addition, the introduction also refers to the conflict between heat protection and wearer comfort (avoidance of heat accumulation). This emphasizes the importance of breathability in addition to heat and flame protection.

Most of the technical values have been taken over unchanged from the old standard. A few requirements have been increased or added. It should also be mentioned at this point that the legislator, purchaser, or manufacturer is still free to define PPE parts that go beyond the requirements of the new EN 469.

What are the main changes to keep in mind? 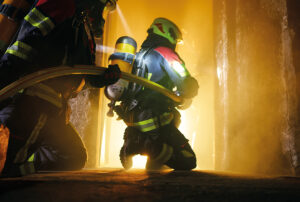 Several tests (especially heat transfer of flames and radiation) have to be performed both after pretreatment and in new condition – the required technical values themselves, however, remain the same. A new addition is a contact heat test for protection level X2. This has long been part of the requirement for EN 659 fire fighting gloves and has now also been adopted for fire fighting clothing.

Other new requirements include an increase in the tear strength of the seams (from 225 N to 300 N) and the thermal resistance of the sewing thread. The requirements of waterproofing (Y) and breathability (Z) remain unchanged. But if impregnation is present, the manufacturer must specify the maximum number of cleaning cycles up to which reimpregnation is required.

Chemical penetration requirements have been reduced from four to now only two “critical” reference chemicals. In terms of visibility/perceptibility, the specifications remain unchanged, but have been transferred from the previous Appendix (B) to the main body of the standard. If retroreflective and fluorescent material is applied (not a must!), then the body contours must be recognizable through this and enclose arms, legs, and torso in particular.

Sew-in labels that are larger than 150 cm² must be flame retardant, and the manufacturer must include a note: “For your safety, the garment must be inspected regularly for visible damage.”
The performance levels in the label for heat transfer, waterproofing and water vapor permeation resistance are indicated by the letters X, Y, and Z (1 or 2). A new feature is that the data for the heat transfer of flames Xf and radiation Xr are combined into one value X.

Outlook and challenge for the future

Basically, this new edition of the standard aims to offer more protection to the wearer of firefighters’ clothing. But it also focuses more on the importance of breathability (heat accumulation) as well as the significance of health protection (contamination prevention, cleaning and servicing of PPE).

For the future, the objective will be to carefully harmonize the multitude of standards (EN, EN ISO, ISO standards) that already exist for firefighters’ clothing in general, but also increasingly for special areas of application.

For the procurers and the fire departments themselves, the challenge will be to strike a balance between garments that can be used as universally as possible in different hazard scenarios and, on the other hand, garments that are individually designed for protection from special hazards (such as technical rescue, forest fire).