Impacts on the proportioning technology 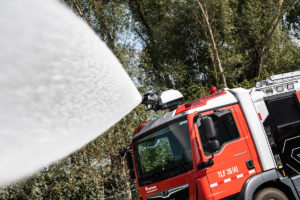 In principle, foam compound can be added to the extinguishing water in two ways – via premixer or pressure proportioning systems.

In premixing systems, water (so-called motive water) is used to generate a vacuum in the admixing unit through which foam concentrate is fed to the extinguishing water on the suction side. The accuracy of the systems is heavily influenced by the viscosity of the foam compound. In the worst case, the foam compound cannot be added at all.

In pressure proportioning systems, a separate foam pump is used to suck the foam compound out of the canister or the foam tank installed in the vehicle. The pressure is increased so that the foam compound can be added to the extinguishing water at the discharge outlet. These systems are also influenced by the viscosity, as the maximum amount of foam compound is no longer reached or, depending on the system, the accuracy of the proportioning also decreases. 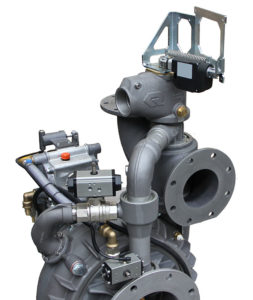 The system-related disadvantage that proportioning systems are only enabled without reservation up to a viscosity of 60 cSt (Stokes = unit of kinematic viscosity) could also not be eliminated with the new FIXMIX 2.0 proportioning system. The maximum suction power of the system has remained unchanged.

It is becoming increasingly common for new foam compounds to be used during the service life of the vehicles, which would result in conversion costs. For this reason, more and more vehicles are being equipped with more than one foam compound tank in order to only have to use the expensive foam compounds in applications where they are absolutely necessary due to their modes of action. This means that foam compounds with different viscosities are used for the same vehicle.

The electronically controlled FIXMIX 2.0 E system, for example, covers these cases as it continuously measures the foam flow as well as the water flow and regulates it within the basic system limits to the desired proportioning value. FIXMIX 2.0 thus combines the simple mechanical design with an electronic control system, thereby significantly increasing the precision of the proportioning process.

The bottom line is that foam compounds with a higher viscosity lead to restrictions in the possible suction heights and a reduction in the maximum proportioning quantity. It remains to be seen to what extent manufacturers will develop their fluorine-free foam compounds towards lower viscosities.

Further information about fluorine-free foam compounds in the blog article “The blessing and curse of ‘fluorine’ in fire fighting foam”.