Preventative fire protection for our environment

3 minutes read
Previous Next
Preventative fire protection for our environment

Sustainability is a big concept and is becoming increasingly important in times of growing mountains of waste. About 20,000 tons of plastic waste are washed into the oceans via the Rhine, about 120,000 tons via the Ganges and about 330,000 tons via the Yangtze alone[1]. In view of these facts, no one denies that waste collection and treatment are justified. On the contrary, in view of such figures, the recycling sector will probably gain enormous importance in the future.

However, recovering the raw materials from the waste is anything but easy, because even delivery and storage causes problems. Many dangerous materials land in the bin and this volatile cocktail ignites regularly in warehouse halls and bunkers all over the world.

Many visitors informed themselves about this constant fire hazard at the Rosenbauer booth. That this is a worldwide problem was confirmed by the variety of international guests eager to learn about preventative fire protection. Interested parties came together from Australia, Asia and the whole of Europe. 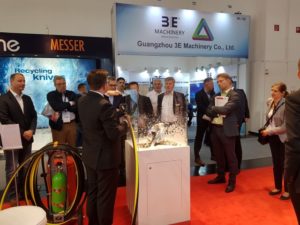 There was special interest in the turret extinguishing system with automatic infrared detection. This innovation is used to scan the surfaces of mountains of waste around the clock for heat; if a critical value is exceeded, the system extinguishes automatically using special water turrets and production can continue unhindered. The extinguishing agent used is not water, but a special foam that simultaneously extracts and cools the oxygen from the heat source. This special compressed air foam (CAFS) enables 800 liters of fire fighting foam to be produced from 100 liters of water, which additionally saves our most valuable resource: water.

The CAFS foam presentation at the Rosenbauer booth attracted many visitors. To illustrate, foam was sprayed from a 50 liter POLY trolley into a plexiglass box. In this way, the excellent extinguishing and adhesive properties could be demonstrated. Poly Trolleys are drivable extinguishers which use compressed air foam as the extinguishing agent and provide an enormous extinguishing effect for the first attack during firefighting.

Rosenbauer turrets are not only used for extinguishing, however; they are also used to clean large rainwater retention basins in sewage treatment plants. Collecting basins must be cleaned before refilling to prevent the discharge of environmentally harmful deposits into the environment. In the past they were painstakingly flushed out by hand. Now Rosenbauer’s turret takes care of them.

All in all, IFAT 2018 was a successful trade fair, for which we would like to thank our visitors. We are grateful we are able to contribute to making the world a better place.

About the Author: Thomas Hahn

When Thomas Hahn rolls up his sleeves, you know it's time to protect human lives, production facilities and warehouses. The mission is clear: Using highly innovative extinguishing systems, fires already in formation need to be detected and automatically extinguished under the most difficult conditions, in tunnels, waste bunkers and power plants. In this way, devastating fires are avoided and the livelihoods of many people are kept safe and secure.