Technological development is progressing rapidly within the automotive industry. Airbags and restraint systems at various critical points within a vehicle have long been standard equipment. The development of ultra-high-strength steels and frame reinforcements has provided occupants of modern vehicles with comprehensive protection in the event of an accident. Through these ongoing developments, new standards are being set with regard to safety. In addition to the classic protection mechanisms for vehicle occupants, the new generation of vehicles promises a variety of additional assistance systems and safety features to avoid accidents, reduce damage, and provide the necessary protection in critical situations.

Overall, the claim could be made that modern technology makes our vehicles safer, and thus the risk of injury decreases, and the odds of surviving a serious accident without harm increase.

However, one needs to take a look behind the scenes at these new “safety features”, because technological achievements can present a hazard potential for injured persons and rescue crews alike.

Potential dangers can basically be divided into direct and indirect risk factors.

Among the direct risks are vehicle components, such as, for example, untriggered airbags and their gas igniters, which in the event of accidental triggering during a rescue represent a great risk of injury to any vehicle occupant and rescuer. For example, airbag igniter cartridges contain a compressed propellant gas mixture at up to 700 bar.

Components of modern vehicle concepts – the so-called “alternative drive systems” – such as natural gas, liquid gas, hybrid, electric and hydrogen systems are also included among the direct risk factors. For instance, electric and hybrid vehicles require a modified approach to rescuing. From the danger of an electric shock caused by components of the high voltage systems and their wiring, to the risk of fire and explosion from installed battery elements, additional information on these components is necessary for a safe and effective procedure in the event of a rescue operation. Indirect factors include the increased requirements for the safety of vehicle occupants in the form of reinforced passenger cells. These can prove to be curses as well as blessings, because the use of ultra-high strength materials can be detrimental to the fast rescue of injured persons from vehicles. Through the use of hot-formed steels, the breaking elongation of the materials correspondingly decreases, meaning that higher working pressures of cutting and spreading tools are required, making their use more difficult and prolonging rescue times. This is also referred to as the so-called “golden hour of shock”, which is the first hour following an accident in which, according to scientific studies, the most important medical measures are to be carried out. 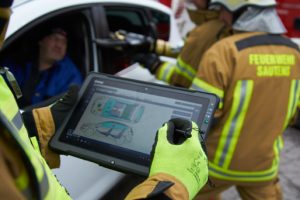 An important prerequisite for efficient and effective rescue is therefore knowing precisely where the reinforcement components, safety elements, and drive components are located and how they work. For example, the interactive Moditech Crash Recovery Database provides appropriate rescue information in mobile form as a supporting tool. However, due to the steadily increasing variety of vehicle models, precise identification of the respective variant, especially in the case of vehicles that have been involved in an accident, becomes a challenge. In such a scenario, Moditech supports the integrated function of a license plate query for exact identification of the vehicle and model variant. Based on this information, rescue workers are able to precisely locate or identify critical components, thus allowing them to coordinate their operational approach. This function makes a very important contribution to this so-called “golden hour.”

There are already many possibilities for license plate recognition in several countries, such as the Netherlands, Sweden, Norway, Denmark, the UK, and the USA. In February 2013, Germany also allowed for this capability by amending the Road Traffic Act.

Thus, when a person is rescued from a damaged vehicle, all steps can be carried out purposefully, enabling rapid and comprehensive medical care on the spot and subsequently in the hospital.

In Austria, access to this information is not yet possible due to the lack of clarification of legality – it is to be hoped that the responsible bodies will deal with this topic in the near future.

About the Author: Thomas Hartinger

Thomas Hartinger is the expert on "bits and bytes" at Rosenbauer. As the Head of Digital Solutions, he is involved with the future software and hardware requirements of emergency response organizations. His creed: "Water will always be used to put out fires, but new technologies can help as well."