Lithium-ion batteries: a blessing and a curse

3 minutes read
Previous Next
Lithium-ion batteries: a blessing and a curse

“Not a week goes by without a fire somewhere in Germany in disposal vehicles, depots, or sorting plants because lithium batteries were not disposed of properly,” said the head of the Federal Association of German Waste Management, Water and Raw Materials Industry (BDE), Peter Kurth, in Berlin.

Many batteries end up in household waste

Lithium-ion batteries are increasingly posing problems for recycling plant operators. They now account for about 30% of batteries on the market, but only a fraction of them are disposed of properly. Many of them end up in household waste or in the yellow bag (plastic packaging waste) and increasingly lead to fires in waste disposal companies with high amounts of material damage. In many technical devices or furniture, such as mobile phones and massage chairs, it is no longer possible to remove the batteries before disposal. In this way, a high and often hidden risk potential is directly fed into the collection of recyclable materials.

In the last 10 years, there has been a rapid increase in fires in waste processing plants. This is directly related to the rapidly increasing numbers of lithium-ion batteries placed on the market and the decreasing collection rates of the same. It can be assumed that there are 1-2 lithium-ion batteries in every ton of residual waste. A single battery can lead to a full fire in the recycling plant.

During transport, reloading, pressing, sorting, or crushing, the lithium-ion batteries contained in the waste can explode due to a thermal runaway (an unstoppable chain reaction in which the temperature rises extremely within milliseconds and the energy stored in the battery is released abruptly). This is triggered by various mechanical, thermal, or electrical factors:

Batteries at the end of their life cycle pose a particularly high risk here. In addition to fire, toxic gases and heavy metals as well as corrosive substances such as hydrofluoric acid can be released.

As the amount of lithium-ion batteries in waste increases, so does the risk of fire in waste management facilities. Batteries now cause about half of all fires in recycling companies. The ever-growing fire risk is also increasingly posing problems for insurance companies, which often have to significantly increase deductibles and premiums in order to remain profitable.

Reliable detection and extinguishing systems offer safety for your own waste management company and advantages for insurance companies. Turret extinguishing systems can apply large quantities of water in a targeted manner to the seat of the fire and thus prevent it from spreading by cooling. These extinguishing systems from Rosenbauer can either be operated manually or execute the extinguishing process fully automatically with the aid of an IR detection system. Infrared systems can still detect hot spots in waste even after the burning battery has been removed, so that all risks are really covered. Such fire protection solutions from Rosenbauer have been implemented, for instance, at Hufnagel Service GmbH or AWG Bassum. 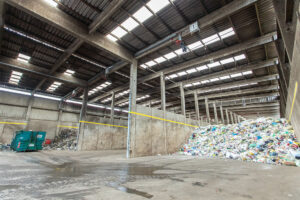 Waste from household waste in a recycling plant 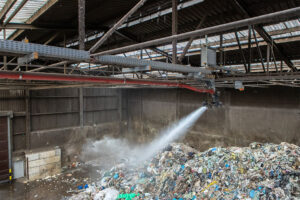