Reach where no turntable ladder has ever reached before: with the new L32A-XS Flat from Rosenbauer.

In today’s new buildings it is a matter of course and even obligatory – in the 12th century, however, no one was thinking about access and rescue routes for fire engines. 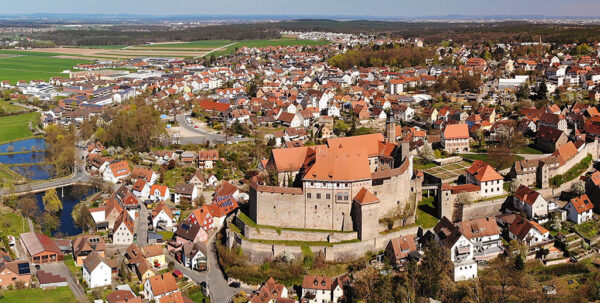 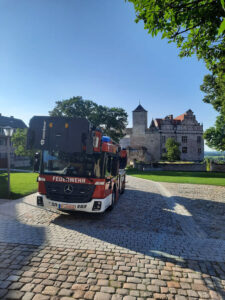 Let’s take a look at Cadolzburg in the district of Fürth, Germany: is this really where a turntable ladder can be used to save lives and preserve material assets? Yes! The new L32A-XS Flat from Rosenbauer has made it possible for the first time to penetrate the castle courtyard with a turntable ladder. The vehicle’s ladder set can be extended to up to 32 m working height (nominal rescue height 23 m, with 12 m rated horizontal reach) to reach people in distress.

The L32A-XS Flat shows its superiority over other aerial rescue vehicles not only in cities with preserved castle complexes, but everywhere where beautiful, historic old towns characterize the cityscape. Old towns are often characterized by low bridges and narrow archways. Due to increasingly dense construction, however, even in younger cities there are often courtyards that can only be reached by passing through narrow archways or passages with low clearance heights. 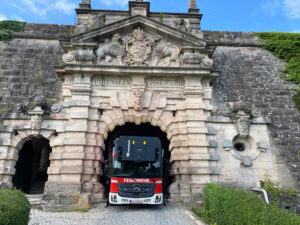 On the road in Kronach: Narrow archways are no obstacle 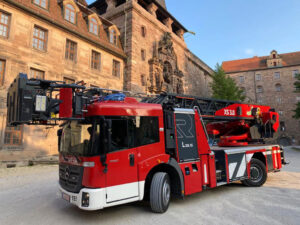 The L32A-XS aerial ladder in Kulmbach

Our turntable ladder was developed, tested and manufactured in Karlsruhe, Germany. It complies with turntable ladder standard EN 14043, is 300 mm lower than other vehicles manufactured according to this standard and offers several optional safety features, in addition to the standard load. Among other things, it can be equipped with SAFESTEP, which uses red (danger/movement), orange (movement possible) and green (no danger) LED lighting to indicate whether the structure is safe to enter. This can be an important orientation aid in stressful operations.

Thanks to the modified, ECE29-certified cabin of the Mercedes-Benz Econic with 170 mm roof elevation, the 1+2 or 1+3 crew can be comfortably accommodated despite the low vehicle height. Storage space for SCBAs is also available as an option, so that the crews can prepare themselves while on approach to the scene. With the help of the rear-axle auxiliary steering with full traction tyres of the 2-axle chassis and reduced vehicle width, the vehicle is maneuverable enough to make its way through narrow inner cities to the scene of the emergency. To achieve the best driving dynamics, both axles make full use of the 2,400 mm width of the structure. You can rely on the power train, which comes from the large series (unchanged engine, cooling, gearbox), the maintenance for which can be carried out at the Mercedes-Benz service partner.

Our vehicle can also be discovered in 3D from home or together with our colleagues at the fire station.
›› Discover the L32A-XS Flat in 3D 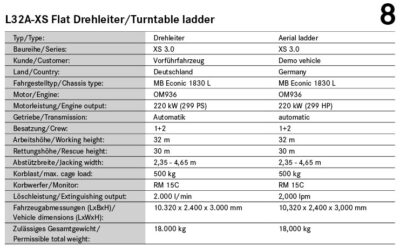