Kuwait relies once again on the E8000/E3000 Rescue Stairs

Kuwait International Airport, or KWI for short, is the largest and only international airport in the Emirate of Kuwait. Unlike in many other countries, the airport fire service in Kuwait is also operated by the Civil Defence. The newly re-named “Kuwait Fire Force” is a long-standing Rosenbauer customer, and has largely renewed its vehicle fleet in recent years.

The Kuwait Fire Force’s airport fleet includes five new PANTHER 6×6, as well as two new E8000 Rescue Stairs. The versatility of Rescue Stairs, when deployed alongside ICAO-mandated ARFF vehicles, are increasingly being recognised by customers around the world, and Kuwait is one of them. Due to its universal operational possibilities, the Rescue Stairs are often one of the vehicles with the most uses in an airport’s fleet. The first E8000 Rescue Stairs were delivered to Kuwait back in 2016.

The E8000 enables safe evacuation from aircraft at operating heights between 3.3 and 8.5 m, therefore also being suitable for the largest passenger aircraft, such as the Airbus A380.

For scenarios at lower operating heights, the stair is also equipped with a front rescue platform with an operating range of 1 to 3 metres.

In the event of an evacuation, and in order to be able to start an indoor fire attack as quickly as possible, the vehicle’s rescue platform is also equipped with a combined water and foam compound tank, an N25 normal pressure pump and a quick-action hose reel. 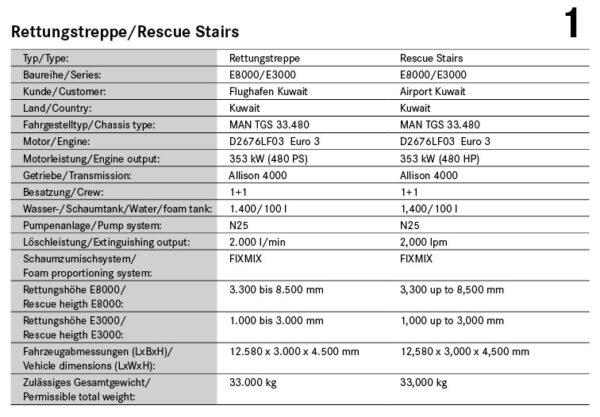