The earlier the better: infrared technology in fire protection

5 minutes read
Previous Next
The earlier the better: infrared technology in fire protection

What is infrared technology used for in fire protection?

There are many different ways that fires can be detected. Detection systems trigger at different times in the course of the fire: The systems that give off an alarm relatively soon for an incipient fire are active detectors such as smoke aspiration systems. They can detect smoke particles in the air. Smoke detectors then detect smoke and fumes. At the end of the spectrum are sprinkler systems which are only activated when a certain temperature is reached on the ceiling due to fire.

Infrared systems are the first to sound the alarm when a fire develops. They recognize a fire as early as the warming-up phase, before fire or smoke particles develop and thus also before a damaging event occurs. 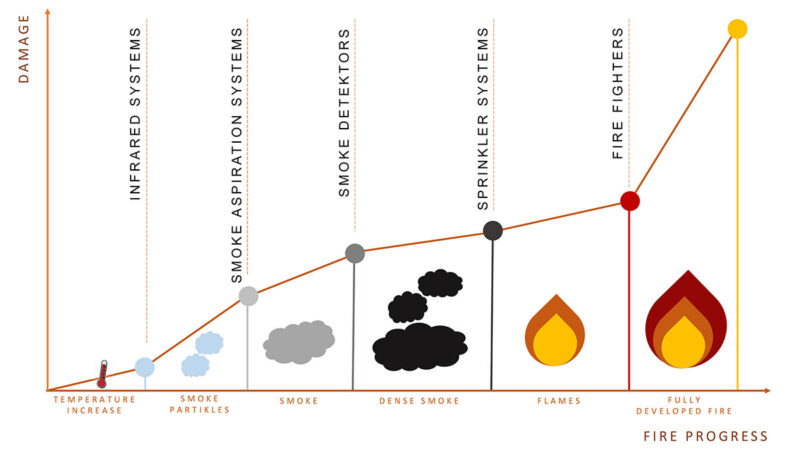 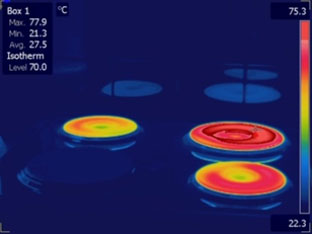 What is infrared thermography?

Every object emits electromagnetic waves in the infrared spectrum – this is called heat radiation. Thermography is an imaging technique used to display the surface temperature of objects. The intensity of the infrared radiation is directly related to the temperature of the measured object.

IR thermography is now state of the art. IR cameras are used by emergency crews to find people or when renovating buildings. The main difference for their application as temperature monitoring systems in fire protection lies in the fact that these devices measure particularly accurately, precisely recognize the position of the hotspot, and must be able to prevent false alarms. Because of this, most products on the market fail to do so.

What are the challenges when using IR systems for temperature monitoring in fire protection?

In many areas in which IR cameras are used – for example in waste sorting plants – false alarms can arise from harmless hot exhaust systems from wheel loaders. To avoid this, many manufacturers often disarm IR systems during daytime operation. This means that an alarm is not just triggered when a specified temperature is reached, but only once this hotspot has also reached a certain size. In this situation, the size is determined by the number of pixels on the sensor. (The more pixels  an element occupies on the sensor, the larger it is displayed.) This means that the alarm threshold is not easily reached and false alarms are thus reduced.

However, as a consequence hotspots that are smaller in size or farther away from the camera will also be ignored. This is because objects near the camera appear larger on the sensor and are displayed with more pixels on the thermal image than objects of the same size at a distance. For example, for a hotspot with a size of 0.5 m2 at a distance of 20 m from the camera, 50 pixels occupy the sensor. A hotspot at a distance of 40 m would have to have a size of 2 m2 in order to be displayed as the same size on the screen and thus be considered equally dangerous.

The same hotspot is displayed larger on the sensor when it is nearby than in the distance. – ©mut GmbH

The result of “defocusing” the camera to avoid false alarms is that real hotspots in the distance, which only occupy a few pixels on the thermal image, are no longer recognized early. As a consequence, the alarm threshold is only reached when hotspots have already developed into major fires. The advantage of early fire detection is therefore no longer given in many cases.

What distinguishes RPA Infrared Detection Ignis3D from other systems on the market? 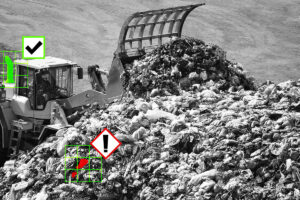 Assesment of hotspots by the RPA Infrared Detection Ignis3D

To reduce false alarms from hot exhausts, Rosenbauer has developed a pattern and vehicle recognition system. This works in a similar way to facial recognition systems, which describe certain elements geometrically. Ignis3D recognizes whether it is a harmless exhaust or a hotspot. “Defocusing” is not necessary here.

In addition, Ignis3D is the only system on the market that is equipped with laser distance measurement. This way, the position of a hotspot in a space can be determined exactly and its danger can be correctly assessed taking into account the distance and the pixels displayed. 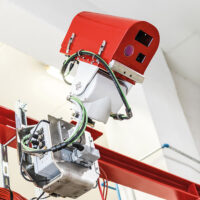 The Rosenbauer IR system RPA Infrared Detection Ignis3D corresponds to VDS 3189 (IR camera unit for temperature monitoring in fire protection) and is recognized according to VdS 2344.