In Focus: The AT RLFA 2000 of the Tolleterau Volunteer Fire Department

2 minutes read
Previous Next
In Focus: The AT RLFA 2000 of the Tolleterau Volunteer Fire Department

It all started in April 2015. The vehicle committee of the Tolleterau volunteer fire department visited Rosenbauer’s Plant 2 in Leonding to learn of the many different possibilities that the AT series has to offer, and secondly to find out more about the production of this vehicle. My speech was attentively listened to during the factory tour, and questions about technical details were asked. After that first visit, one thing was clear to me: “This will be a special vehicle!”

Many more discussions followed, in which the possibilities were laid out, and the technical details were looked at with more scrutiny.
I was particularly fascinated by the depths into which each and every member of the team had delved in relation to the issues.

At the beginning of December 2015, it was time. The tender was created, then opened, followed by a comparison of the performance of the products offered. It was an extremely cold and rainy day. But even this could not deter the committee, and the vehicles presented were meticulously compared.

Through this best-bidder process, it was decided to award the contract for the delivery of the new AT RLFA 2000 to Rosenbauer.

After the contract was awarded by the municipal council of St. Georgen, the work started: job clarification, preparation of the detailed list of documents, many meetings, phone calls, and countless emails (187, to be precise). Close contact with the fire department during the commissioning phase proved to be very helpful, improving the efficiency of this project. Technical details were generally clarified in a matter of hours. Thus, the construction progress was never interrupted and moved forward swiftly.

At the beginning of October 2016, the shell construction meeting was held at Plant 2 in Leonding. Despite careful planning of the firefighting equipment payload, this shell construction meeting took about 11 hours. The placement of each item of equipment was re-examined and questioned again. Although it was a long and busy day for everyone involved, the result was undeniably impressive.

This detailed shell construction meeting was followed by the final construction of the vehicle. As part of pre-acceptance (about 2 weeks before the final acceptance), some minor adjustments and changes were made, so that the wishes of FF Tolleterau could be met precisely.

On December 7, 2016, the big day had arrived. The fully equipped vehicle in its completed design was accepted by the vehicle committee.

For me as a consultant, the entire handling of this project was a prime example of good practice. This well thought-out and highly practical rescue and firefighting vehicle is a perfect example of what is possible when many people work together towards the same goal. 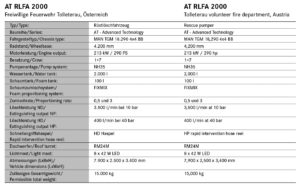