Health is our greatest asset – operational hygiene in the fire service

The topic of operational hygiene has become increasingly important within the fire service in recent years. It is being discussed and researched more than ever. Not long ago, the soot-covered firefighter was the epitome of the courageous hero, but this image is now considered outdated thanks to new knowledge. Safety and, above all, one’s own personal health takes top priority for emergency personnel, a fact that is also reflected in the general megatrend of “health” (see firefighting trend map 4.0). The everyday lives of firefighters are usually challenging – and sometimes dangerous – enough without being exposed to long-term health risks from toxic fire smoke and smoke particles. Through a number of relatively simple and consistent hygiene measures, it is possible for firefighters to protect themselves against contamination and thus against long-term health risks.

But what exactly is contamination, what exactly is so dangerous about a bit of dirt and soot on protective clothing, and how can you protect yourself sufficiently both during and after deployments? At Rosenbauer, a group of experts has been dealing with these and similar issues for quite some time, with the aim of raising awareness of this important topic, providing information and, of course, developing well thought-out concepts and solutions for the fire service. 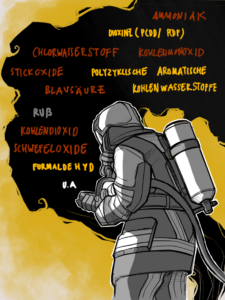 When we talk about contamination, this basically includes any form of dirtying of objects and living beings alike by pollutants. Anyone who has received training in respiratory protection or firefighting is aware that, depending on the material being burned, fire smoke can contain both a wide range of toxic gases, such as carbon monoxide, carbon dioxide, hydrogen chloride, and hydrogen cyanide, and organic products that are formed during the combustion process that are potentially harmful in the long term, including aromatic and polycyclic aromatic hydrocarbons (PAHs), which adhere particularly well to soot particles. If these toxic substances get into the body, for example through inhalation, ingestion or being absorbed through the skin, this can lead to long-term damage and impairment of the body. As a rule, suitable protective equipment and appropriate respiratory protection should be used during firefighting operations to protect against direct contact with and absorption of these toxic substances. However, even the best protective equipment has its limits, and the phase after an operation also harbors dangers whereby a firefighter can unknowingly take in toxic substances through carelessness or ignorance, for example when taking off protective clothing, and – in the worst case – taking them home and introducing them into their own personal environment.

In our soon-to-be-published “Targeted operational hygiene” information folder, numerous tips and suggestions for measures to be taken both during and after a deployment can be found.

In the course of intensive discussions around the subject of operational hygiene, attempts were first made to discover the concentrations in which pollutants – primarily PAHs were analyzed – are taken on by protective suits in indoor fires with heavy smoke exposure. At the test site of the Wels fire department, an indoor fire was simulated in a fire container in which wood, foam mattresses and pieces of furniture were ignited in a controlled environment. Five colleagues equipped with standard protective clothing and breathing apparatus entered the fire container in the name of science, in order to be contaminated by the smoke particles. Analyzes are currently being carried out in a laboratory upon the 150 textile samples taken, which will be evaluated in the scope of a bachelor thesis. As can be seen from the pictures, the extreme soiling of the test clothing suggests an intensive pyrolysis phase and the high amounts of polycyclic aromatic hydrocarbons (PAH) that will be investigated.

Detailed findings will be published here in one of our coming blog posts. 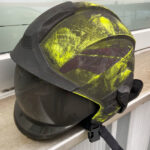 The knowledge gained will immediately feed back into our product development, in order to facilitate the best possible protection in tough firefighting operations.

As an innovation manager and collector of ideas, Georg Pilsner has always listened to new product ideas from his colleagues. According to the motto "Every idea counts", everyone in the company should have the opportunity to actively contribute to the next firefighting innovation.