Extinguishing fires with water or foam is not feasible in certain sectors, as these extinguishing agents would destroy the object or render it unusable. Examples of this are the protection of museums, libraries and archives, or computer and server rooms. In such cases, gases are used for extinguishing.

Extinguishing gases are divided into oxygen-displacing gases (such as inert gases and carbon dioxide) and chemically active extinguishing agents.

The term “inert gas” is derived from Latin: inert [lat.] = inactive. They are characterized by their lack of reactivity, and generally do not form any chemical compounds with flammable materials or other substances. These gases, such as nitrogen (N2), carbon dioxide (CO2), and argon (Ar), already occur naturally in the atmosphere and are largely obtained for use in extinguishing systems from the air we breathe. Once released, they have no adverse effect on the environment. After their application, all that is required is good ventilation of the room. In addition, they are colorless, electrically non-conductive, and completely residue-free. They therefore have no impact on the functioning of the systems being protected, which remain fully functional even after an extinguishing operation.

The extinguishing effect of inert gases has its basis in the displacement of oxygen in the room. The flames are smothered and the combustion process is halted. Another benefit is that it reduces the oxygen content in the air from the outset. As a result, the outbreak of a fire in certain sections of production processes, sensitive storage areas, or museums and archives with unique cultural goods can be excluded. 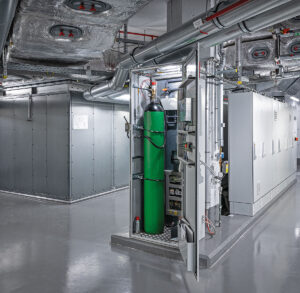 Chemically active extinguishing gases, such as NOVEC1230© work to directly intervene in the combustion process. The extinguishing effect is based on the extraction of heat, with the displacement of oxygen being secondary. The concentration of the extinguishing agent is lower than that of inert gas extinguishing systems, as it is not necessary to flood the entire room.

Extinguishing gases can reliably protect entire rooms and can also provide targeted protection for flammable goods through the alignment of extinguishing nozzles directly toward them. However, the potential dangers to individuals posed by gas extinguishing systems must not be ignored. Optical and acoustic alarms warn those present before the extinguishing system is activated, in order to allow them to evacuate in good time.

The selection of the appropriate extinguishing gas depends on the intended use. For example, the inert gas argon is used at extremely high combustion temperatures, such as those of metal fires, because unlike CO2 it is not at risk of splitting, even at high temperatures.
Essentially, however, CO2 is the most popular choice of extinguishing gas, because it is versatile, inexpensive ,and readily available worldwide.
Nitrogen is often used to make rooms inert and – thanks to its good compatibility with humans – is particularly suited to protecting rooms that are regularly occupied.