Florian Messe 2020: A successful event in spite of mandatory masks 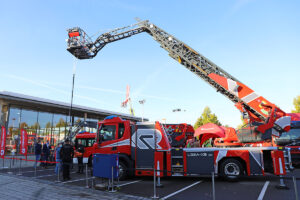 Rosenbauer at the Florian Messe 2020

After three successful days in historical and wonderful Dresden, the Florian Messe drew to a conclusion on October 10, 2020. It had opened three days earlier as the only major German trade fair for fire services, civil protection and disaster control, albeit under strict coronavirus prevention measures. The chances of success of the 235 exhibitors in terms of complying with the strict hygiene measures were initially considered to be low. Nevertheless, the team from Rosenbauer Germany came to Dresden with the most extensive product range to date, and were pitched at an attractive outdoor stand. After the cancellation of Interschutz, we finally had a chance to exhibit numerous innovations, and even brought along 3 world firsts.

The public focus was first and foremost on the aerial ladder team with the L32A-XS Flat on a Mercedes Econic chassis. With a maximum height of 3,000 mm and a steerable rear axle with a total weight of 16 tons, this is an absolute world-first from the aerial rescue center of excellence in Karlsruhe. 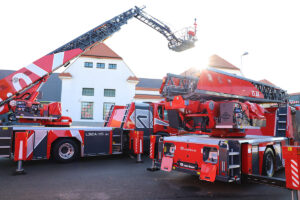 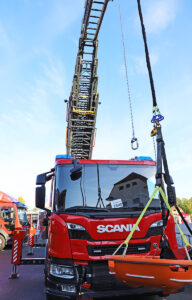 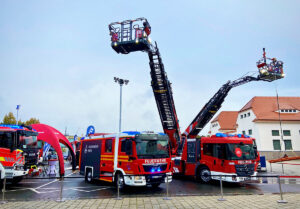 The Rosenbauer exhibition stand on the open-air site 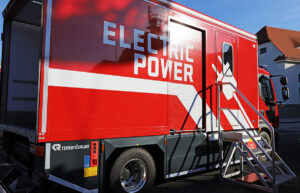 Considering the trend-setting introduction of electric mobility to fire brigades, rescue services and disaster relief agencies, Rosenbauer, in cooperation with Volvo Group Trucks, unveiled a fully electric Volvo FL Electric (road chassis with a total weight of 16 tons). Mounted on this was a GW logistics superstructure in CL-P variant, equipped with 3 fully-loaded Rosenbauer RTE RC Profile roll-on/roll-off containers. From the numerous conversations relating to technology that took place, it can be concluded that Rosenbauer is looking ahead to a completely new development path for future users from the fire brigade, rescue service and disaster control sector. Electromobility is the path.

Another world first from the field of extinguishing systems was the RTE Robot multfunctional robot, loaded and unloaded by means of the tail lift on the Volvo FL Electric logistics equipment carrier. The remote-controlled robot enables penetration and extinguishing of burning areas or buildings that are no longer accessible to emergency personnel. The tracked manipulator can even negotiate stairs without any problems. 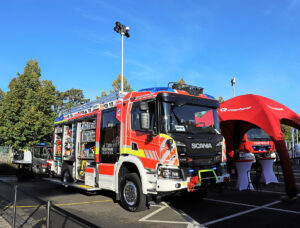 HLF 20 of the Paderborn Fire Department

Alongside an HLF 20 tank firefighting vehicle of the Paderborn fire brigade, a municipal vehicle of the tried-and-tested AT series was a major eye-catcher (in Saxon: Hingugger). The vehicle, which was fitted with the latest equipment on a SCANIA P410 B4X4HZ chassis, proved once again that Rosenbauer’s successful AT series will continue to set the standard for serial production vehicles for years to come.

The AT’s “little brother”, the CL, was also of great interest to visitors. As a compact series for extinguishing and special vehicles, the medium extinguishing vehicle (MLF) presented by the Kehl fire brigade impressed as a flexible body concept for vehicles up to 12 tons total weight.

As at previous trade fair appearances, the show truck with both new and tried-and-tested equipment and extinguishing systems drew the attention of numerous customers. The equipment team exhibited, explained and demonstrated, among other things, the FANERGY B16 battery-powered high-performance fan, the new GLOROS T1 technical gloves, the new RTE FX nozzle series and the SL 50 and SL 10, from the new generation of RFC POLY extinguishing systems.

One colleague aroused the curiosity of visitors about the products of Digital Solutions, including telematics and EMEREC, with a drone demonstration. 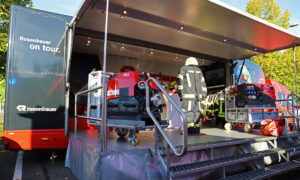 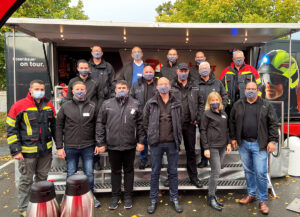 Employees at the Rosenbauer stand

Despite strict coronavirus hygiene measures and mandatory masks, and somewhat mixed fortunes with the weather, with temperatures around 11°C, visitors came to Dresden from almost all federal states in Germany. And although they found strict hygiene rules and measures in place at the Rosenbauer stand, including the mandatory wearing of mouth and nose protection, regulated entrance and exit, hand disinfection and an appeal for a quick and targeted visit, they were looked after by a highly committed stand team which organized and managed the situation in an incredibly professional manner.

About the Author: Torsten Ritzmann

At Rosenbauer Deutschland GmbH, Torsten Ritzmann is responsible for all sales activities in Germany, from the HEROS-smart to the PANTHER. As a long-standing fire chief of an association of municipalities' fire department, he is very familiar with the issues firefighters are facing. His motto: "So far we have had every fire extinguished!"