Even more complex than tests with foaming agents are extinguishing tests with dry powder. 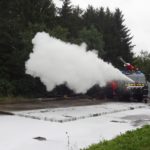 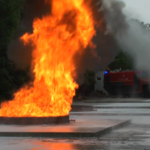 For water monitors, with the ChemCore System, Rosenbauer has the option of injecting dry powder into the center of the circular water jet of the hollow jet nozzle. The powder is carried by the water and thus achieves greater throw ranges. The powder exerts its anti-catalytic extinguishing effect when it hits the object to be extinguished, and it is supported by the water and cooling effect. This creates an extremely efficient extinguishing system.

To witness this special extinguishing effect, I was allowed on a PANTHER S from Leonding on the way to a manufacturer of powder systems in southern Germany. The trip in the PANTHER across the German highways was worth the effort of the preparations in and of itself, but the actual extinguishing tests were even more exciting. Together with a team from our development department, various fire scenarios were created and extinguished with the PANTHER under realistic operating conditions.

However, the most exciting tests for me are arguably those where extinguishing systems from different manufacturers are compared. Such opportunities are extremely rare. They can, for example, occur in the course of working on standards.

The following pictures were captured at a test facility in France. Here, the idea was to scientifically compare the extinguishing systems of several manufacturers in combination with foaming agents from other manufacturers under realistic operating conditions. The main application here was a liquid fire with a surface area of 86 m², which was repeated several times. 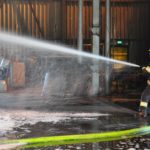 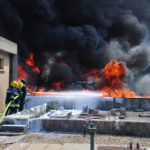 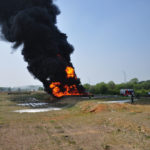