Escape stairs: the height makes all the difference.

4 minutes read
Previous Next
Escape stairs: the height makes all the difference.

This may not be a well-known fact, but escape stairs are often an airport fire department’s most commonly deployed vehicle. The essential purposes of escape stairs can be expressed in a nutshell as creating quick access to the aircraft for rescue workers and evacuating large crowds quickly and safely.

To meet the requirements of airport fire departments, Rosenbauer manufactures two variants of escape stairs, the E5000 and the E8000.

In the last blog post on the topic of escape stairs, a focus was placed on their function and requirements. In the upcoming blog posts, I would like to go into greater detail about the differences between the E5000 and the E8000, and examine the deployment tactics from the customer’s perspective. 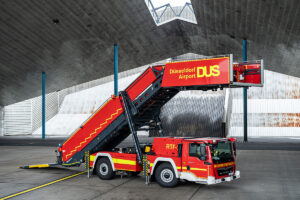 The model names of the different escape stairs refer to the maximum rescue height that can be achieved in combination with the rescue platform. The heights of the E5000 and the E8000 are approximately 5,500 mm and 8,500 mm, respectively. The exact height depends on the respective configuration of the chassis, however.

The special feature of the E5000 lies in its specification – a special adaptation in the area of the driver’s cab allows a very low height to the upper edge of the rescue platform to be achieved. This gives the E5000 the unique ability to dock onto the doors of short- and mid-range aircraft.
With a height range of approximately 2,500 to 5,500 mm, the E5000 is able to cover about 92% of all door types typical of common aircrafts. 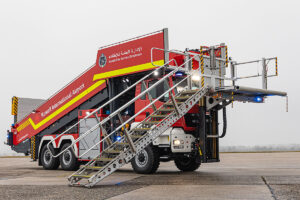 The front platform E3000 can optionally be integrated into the E8000.

The E8000 escape stairs, on the other hand, are built on a 3-axle chassis, to be able to offer maximum performance in terms of both permissible total weight and height. The E8000 is primarily in operation at airports with a high proportion of long-haul air traffic. The rescue platform’s maximum height even offers the possibility of docking with the upper deck of an Airbus A380.

A front platform – called the E3000 – is available as an optional accessory for access to short- and mid-range aircraft. A pump system can even be integrated into the E8000 escape stairs.

Not just differences, but also similarities. 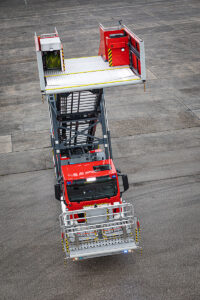 The rescue platform is equipped with a rapid attack hose reel.

As well as their differences, both escape stairs also have a lot in common. Both are equipped with the same control architecture.

They are both fitted with a hydraulic jack system with automatic level compensation/regulation (ALR) and HLCS – High Level Control System – developed by Rosenbauer. The HLCS enables the pre-selection of different door types of all common aircraft variants, and is of great assistance to the operator. After selecting the aircraft type and the approach door, the stair body aligns to the desired height after confirming with the safety switch. The operator can then perform a fine adjustment. Sensors and camera systems further support the operator, thus guaranteeing a perfect docking process.

Both escape stairs also have a rapid attack hose reel on the platform and a power generator, enabling them to be fully prepared for use in an initial attack.

Experiences and surveys have shown that escape stairs are deployed on average 2-3 times per week at an airport. The reasons for so many application scenarios, what influences the decision behind a purchase at many airports, and what tactical considerations are behind this will all be dealt with in further detail in the next blog article.