The environmental protection and sustainability of firefighting equipment

Firefighting operations naturally require devices and personal protective equipment that function reliably under exceptional conditions. Depending on the scenario, they must protect against extreme influences such as heat and flame, cold and constant rain, but also fuels, hydraulic oil and – depending on the protection class – even against viruses and bacteria.

Now you might think that protection under extreme conditions and a minimal ecological footprint are at odds with one another, and that you can only achieve one or the other. But despite the generally intensified discussion in recent years, we at Rosenbauer have always felt ourselves to be committed to society, and therefore also to the environment.

Careful use of resources

Rosenbauer’s goal is to be a pioneer in the field of firefighting equipment, not just in terms of safety, innovation and technology, but also in setting the best environmental and sustainability standards across the industry.

So, for example, many years ago, and in cooperation with the engine manufacturers, we switched our power generators to modern injection engines – a novelty in this class so far. The new engine saves fuel, and the exhaust gas emission values have been noticeably reduced. 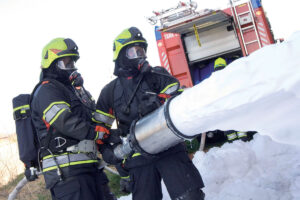 The sophisticated power generator circuitry installed within the vehicle makes it possible for its main engine to be automatically shut down and the electrical consumers to be powered by the greener power generator in many applications. This facilitates a significant saving in fuel consumption and pollutant emission, and in addition extends the service interval for the vehicle engine.

Rosenbauer is a strong advocate for the use of fluorine-free foaming agents. Here, too, we want to make our contribution to significantly reducing the use of potentially environmentally hazardous substances. Even though Rosenbauer is not a manufacturer here, we are actively involved in promoting environmentally friendly applications.

State-of-the-art mixing systems and extinguishing technologies reduce both the consumption of extinguishing agent additives and of valuable water without compromising on protection and safety.

Recyclable and environmentally friendly materials from head to toe 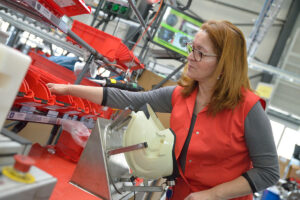 We developed and produced our first firefighting helmets back in 1992. Even at the material selection stage, special attention was paid to sustainability, with high-temperature-resistant but recyclable polyamide thermoplastics being used instead of problematic thermosetting plastics.

This basic principle has been consistently maintained right through to the present day. The latest generation of firefighting helmets are also made with materials which have been continuously improved, but always on the basis of thermoplastics, therefore being as environmentally friendly as possible.

Nearly 1 million Rosenbauer helmets have been sold worldwide to date. In the case of the helmet shell alone, more than 500,000 kg of problematic thermosetting plastics have not been used by the company as a result of the use of environmentally friendly materials, thus protecting the environment.

The same principle applies to the development and production of protective clothing and firefighting boots. In spite of the requirement that materials for protective clothing must be exceptionally resistant, sustainability is also of utmost importance here. The high-quality leathers used for the current TWISTER and TORNADO boot models, as well as others, come exclusively from German sources, and are in compliance with the highest possible standards. The main materials for protective suits such as outer fabrics, woven fabrics, non-woven materials etc. are sourced entirely from Central Europe (predominantly Germany), and are produced under the best possible environmental conditions. 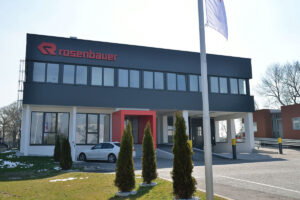 As a general rule, much attention is also paid to less-obvious “environmental sins”, such as unnecessary transport distances, which are avoided wherever possible. In this way, we ensure that regionality always takes precedence when this is possible. Both raw materials and finished products are produced to as great an extent as possible in the region of Central Europe, and transport routes are minimized.

Firefighting helmets are made in Austria, boots in Croatia and protective clothing in Slovakia. We could probably produce some of these things for far cheaper at the other end of the world, but we have consistently avoided relocating to regions thousands of kilometers away for reasons of sustainability.

All production sites are regularly inspected and audited. Protective equipment from Rosenbauer is always manufactured under the best working conditions, which is why most of our employees have been working for us in these companies for many years.

Special attention is currently being paid to avoiding plastic packaging. For example, the disposable plastic film packaging previously used in the helmet manufacturing process has recently been replaced with a returnable packaging, which is reusable. This measure alone will save more than 100,000 square meters of film waste per year.

Further measures are already planned, with the stated goal being to eliminate plastic packaging to as great an extent as possible, or to reduce its use to an absolute minimum.

Contaminated protective equipment represents a known health risk and, in our understanding, is of course also part of the sustainability responsibility towards the emergency crews.

New concepts, where, following a firefighting operation, protective clothing is deposited in separate vehicle compartments to prevent cross-contamination by pollutants, are also offered and constantly improved, as well as a sophisticated concept for the hygienic cleaning of protective equipment and the provision of clean hire clothing during the cleaning process.

For Rosenbauer, responsibility towards society, people and the environment is not a short-term buzzword, but an awareness anchored in the Group. Much has already been achieved. Let’s work on bringing protection and safety for the emergency crews’ even more in line with sustainability and environmental awareness in the future.