A development partnership with Rosenbauer was concluded in 2018 for the testing of an electrically powered firefighting and rescue vehicle for the fleet of the Berlin fire department as part of the “eLHF” (electric firefighting and rescue vehicle) project. The project is a project funded by the Berlin Program for Sustainable Development (BENE funding code 1213-B4-N) and is co-financed by the European Regional Development Fund, which means that the “eLHF” project is directly supported by funds from the European Union.

The aim was to jointly bring a firefighting vehicle to market that was suitable for series production and everyday use, with a real test vehicle as the answer to the so-called megatrends of the future in the fire service.

An overall vehicle concept was developed first in order to ensure the success of the project. With the RT, a Rosenbauer chassis serves as the platform onto which the crew cab and firefighting equipment are installed. 100 % Rosenbauer is therefore to be understood as an essential characteristic of this vehicle.

“The ‘e’ makes the difference” – this is how the vehicle is promoted in Berlin. The ‘e’ does not just stand for the electric drive, but also represents the ergonomic and many other aspects that make the new vehicle stand out in the Berlin fire department’s fleet.

The innovative vehicle, which is equipped with a hybrid-electric system architecture for the propulsion system and for operating the extinguishing technology, is designed with the intent of reducing pollutant emissions and noise pollution. The aim of the joint development project was to switch more than 80 % of the regular operations of a firefighting and rescue vehicle to a purely electric operating mode. In addition, the vehicle also needed to be disaster-proof, so the installation of a so-called range extender package was essential to allowing it to deal with continuous operations.

The technical features of this vehicle have also been designed with an emphasis on ergonomics. As a result, the vehicle can be driven at different heights, and it can also be lowered at the scene of the emergency, so that all equipment can be comfortably accessed from the ground.

The cabin layout has also been revolutionized to make it more comfortable for emergency crews, and to significantly improve communication between the personnel.

The tailor-made vehicle architecture also enables unprecedented driving dynamics due to the integral design, the self-supporting structure, the low center of gravity, and the permanent all-wheel drive.

The one-year real-life testing phase of the eLHF will take place in 2021, with the vehicle spending several months at each of the fire stations in Mitte, Suarez, and Schöneberg. These stations were selected due to their locations within the city center’s low emission zone, as well as the number of emergency calls each station generally receives. 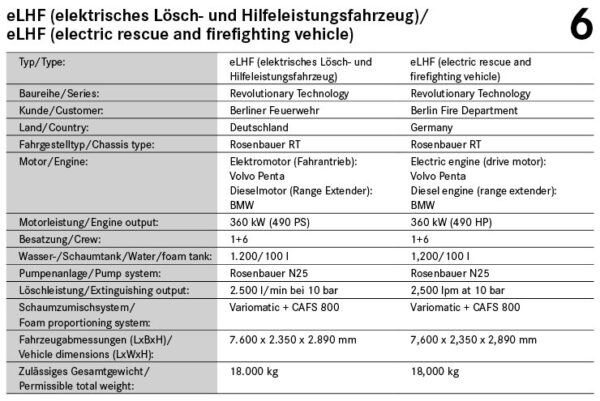 Clemens Stangl-Kremser is a development engineer at the Rosenbauer E-Technology Development (RED) and is working on optimizing the fire engine of the future. The continual development of the Concept Fire Truck (CFT) into sophisticated production vehicles providing new firefighting solutions is what motivates him every day.