It’s all about Physics: Tipping

5 minutes read
Previous Next
It’s all about Physics: Tipping 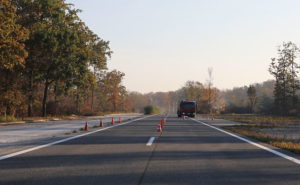 Current incidents underline that the overturning, i.e. tipping, of tank firefighting vehicles is currently a hot topic in the firefighting sector. Rosenbauer, as an innovation and world market leader, has always diligently dealt with the topic of safety and accident prevention. Rosenbauer Engineering invests a great deal of time and energy into integrating the best possible accident prevention solutions into its products and of always being at the cutting edge of technology and setting new standards.

Rosenbauer see, first and foremost, their role as including informing relevant persons as to which physical forces act on a tank firefighting vehicle when cornering, and which measures for accident prevention can counteract these.

Weight and centrifugal force when cornering

The faster a vehicle turns into a curve, the greater the centrifugal force FF  acting on its center of mass m. In this view, it is assumed that the vehicle does not push outward, i.e. slide, but instead holds the same line. 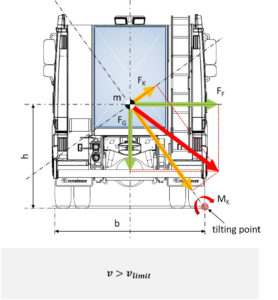 Figure 2: Forces when cornering above the tipping limit

Mathematically, the following conclusions can be drawn from the pictures and formulas:

Verification of the tipping angle by means of a tipping test

Rosenbauer subjects each newly designed vehicle to a tipping test. In this test, the vehicle is brought in an inclined position by means of swivel stage. This simulates cornering. 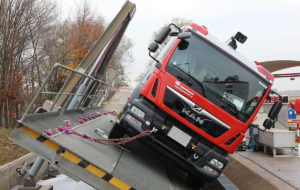 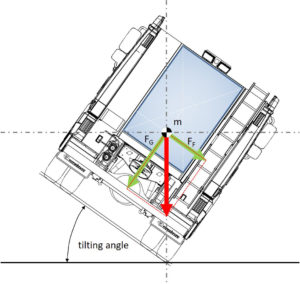 For firefighting vehicles to meet the general safety and performance requirements and to comply with European Standard EN 1846-2, they must be able to be tipped to the following static tipping angles, depending on their weight class and category:

A tipping angle of 30° simulates a centrifugal force FF, which corresponds exactly to half the weight force FG.

Supportive measures to reduce the risk of tipping

Peter Hutterer is responsible for making Rosenbauer's "little vehicles" (AT, ET, CL) fit for the big, wide world. To keep them "healthy" throughout the product lifecycle, he strategically brings them back on track and injects them with a bit of Rosenbauer's mechatronics DNA.