As already mentioned in several blog articles, the Rescue Stairs is a special technical development by Rosenbauer that primarily supports the access of firefighting and rescue teams into an aircraft and the monitored evacuation of passengers.

A Rosenbauer Rescue Stairs can therefore also not be compared to ground support equipment (GSE) at the airport. In an emergency, every second counts, every move must be perfect, and the setup time for personnel and equipment must be reduced to a minimum. The E5000 and E8000 Rescue Stairs vehicles were uncompromisingly designed as rescue equipment and for use by airport fire departments.

The design features underlines this conceptualization as a rescue vehicle. Operators can also be supported in delicate situations by means of state-of-the-art sensor technology. The use of suitable and adapted chassis concepts make the vehicle robust and flexible in a wide range of operational situations. Safety is always the top priority and runs through the entire concept, from the choice of materials, special safety devices, or the operating concept.

A rolling stone gathers no moss 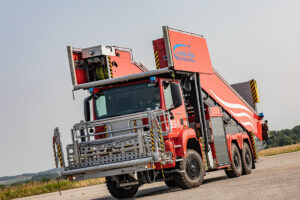 The above points already applied to the Rosenbauer Rescue Stairs in the past decade. But even the success of the last few years does not mean standing still. As the saying goes, a rolling stone gathers no moss, and this success was the motivator to further improve the Rescue Stairs. In this blog post, I would like to take a closer look at the consistent further development of the Rescue Stairs.

The improvement process began in the context of customer discussions on the subject of feedback on our products. These discussions with some clients were quickly extended in the form of workshops in order to get an overall picture of the mood. The feedback received thus provided the basis for further development. Another point was the standardization strategy of the operating concept of Rosenbauer vehicles with the RBC Logic Control System. 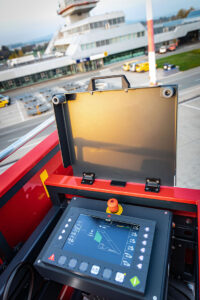 Simpler, more intuitive, more ergonomic, and even more Rosenbauer: that’s how I would describe the new operating concept of the Rescue Stairs in a few words. At the center of the new operating concept is the RBC LCS 10-inch display, which also appears in various vehicle types, such as the PANTHER. This should make it easier to switch between Rosenbauer vehicles and reduce the amount of training required. The display is positioned in the crew cabin on a swiveling arm. This enables a new way of operating the Rescue Stairs. Both the driver and the Co-driver can operate the display close to the body. Touch functionality allows the operator to manage all functions as if on a tablet. The emphasis is on can, of course all functions can also be selected via buttons. The swiveling arm also allows the view to be directed to the docking scenario during operation. The RBC LCS 10″ display is not only installed in the crew cabin, but also on the rescue platform. This ensures equality of operation between the two operator stations.

Another essential part of the operation is the HLCS (Height Level Control System), which is easier and more individualized to operate thanks to the new operating system. With just a few command inputs, an aircraft and door selection can be made, allowing the correct rescue height to be selected quickly and accurately. 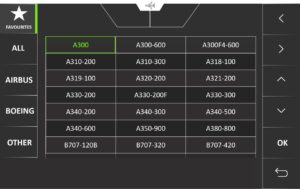 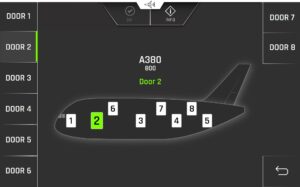 The new operation of the Rescue Stairs is based on a completely new control architecture. The control system could be simplified and reduced by using safety certified control units. Less is more in this case and complex redundancies could be eliminated. The responsible technicians broke new ground not only with the control units, but also with the programming. Through so-called model-based programming, the software could be developed largely without the actual hardware. This not only reduced the time required on the product, but also the development time.

However, despite all the changes, the control system and operation still comply with EN 13849 and were also able to pass the corresponding inspection by a technical testing organization. The EN13849 standard describes the safety of the control system, and the proven 2-handed operation of the Rescue Stairs continues to be an important component.

In addition to the operation, the lighting concept of the Rescue Stairs was also revised. State-of-the-art high-performance LED strips are used on the outside and inside of the stair body. The optimal lighting of the steps ensures perfect step safety even in the dark. The environment can be even better illuminated with the new lighting and thus also creates the perfect visibility at the scene of the emergency. A function that should not be underestimated, for example, in the event of an evacuation of large crowds.

In addition to the scene lighting, the rear lighting of the Rescue Stairs has also been extended, thus integrating even better into the Rosenbauer fleet in terms of appearance. Together with the operating concept, it ensures even more Rosenbauer identity. 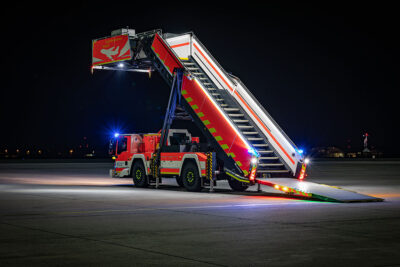 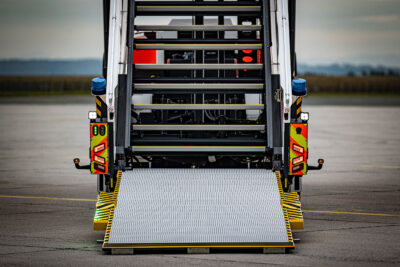