Changes in Vehicle Technology Pioneered by the Rosenbauer AT

Compared to today, the number of municipal vehicles produced by Rosenbauer was tiny in the late 1980s and early 1990s. The reason for this was that the production was based on the framework engineering principle that was commonly used at the time, which was also the process employed by many smaller vehicle manufacturers and even metalworking shops. In addition, there were hardly any standards in place to regulate qualitative requirements. This scenario led a group of resourceful colleagues to think about new, alternative ways of building vehicles. Franz Hochdanninger from Sales and Alfred Glatzmeier from Development gave input that led to a true innovation in terms of vehicle architecture. Alfred Glatzmeier came to Rosenbauer from the world of aircraft manufacture, and thus also from the world of so-called frames (the non-visible cross-connections within the fuselage). The first sketches were drawn up on a napkin – in the course of heated discussions – in a Linz beer garden in August 1992.

A structure of self-supporting frames and longitudinal walls was to result in a torsionally rigid body. This has the advantage of enabling a significantly more compact, lighter, and more integral construction.

Through their commitment, the colleagues finally managed to realize the new concept. The functional aspects and ideas laid out at that time came to form the cornerstone of today’s vehicle technology and the backbone of the success story of the Rosenbauer AT that continues to this day.

A groundbreaking sensation at Interschutz 1994

The 1st AT went to the Bad Mühllacken Volunteer Fire Department.

The unveiling of the AT1 12s26 at Interschutz 1994 had a lasting impact upon Rosenbauer’s fortunes. A great deal was different about this vehicle. The external appearance resembled more that of a sports car than something from the world of firefighting superstructures. Dynamic thanks to the flowing exterior, attractive due to the design, aerodynamic thanks to the close-bound roof superstructure, integrated due to the fusion of the chassis and superstructure, compact due to the core zone and the utilization of all empty spaces, highly functional due to the ergonomic crew entrances, pumping control, and crew cab concept. A quantum leap compared to the square vehicle bodies that could be found throughout the remainder of the exhibition grounds at Interschutz in 1994.

From August 1994, we began to document the parts of the largely handcrafted AT1 and immediately began to derive and design the basic concept for the 16s, which also became the first commercially available vehicle. 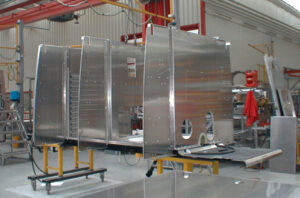 Frame structure in the 1st generation of the Rosenbauer AT

The AT also gave rise to a change in the development approach, the introduction of simulations, as well as the use of 3D CAD and new manufacturing methods. Manufacturing technologies and prefabrication were also rethought, with laser cutting machines and hydraulic folding presses being introduced. Work processes were reduced along the line assembly, pre-assembly and logistics were revised, and new methods were introduced in the area of product definition through code lists, order processing, work contract formulation and vehicle handovers. The era of industrial production at Rosenbauer had begun.

1997 saw the development on the basis of a sheet metal construction – which originated in the AT – being adopted for the MBW Concept (now the CBS) and the PANTHER.

The development of the next generation

Back in 1999, there were already many vehicle variants of the Rosenbauer AT.

Since 1998, the knowledge gained with the AT propelled Rosenbauer into further development. The green light was eventually given at the end of 1999. The aim was to significantly improve the frame construction through more precise and flexible single-sheet system production in order to achieve even greater functional integration.

The functional aspects of operation (as an example, the operator had to have a very good technical understanding when operating a pump due to the flow logic, while fire brigades often had many non-technicians among their ranks) prompted us to think about new solutions. The handling had to be different, and – more importantly – easier. For the first time the word ‘CAN bus’ entered our vocabulary. Although this could not be introduced immediately, the basic functionality of the new operating philosophy was already implemented in the AT’s prototype. We meticulously examined the functional sequences and logical relationships in order to shorten the number of operational steps, so as to simplify things for hectic operational situations. The logic of the Rosenbauer Logic Control System (RLCS) was born.

Some of the many new features: rotating staircase, flat roof, LED 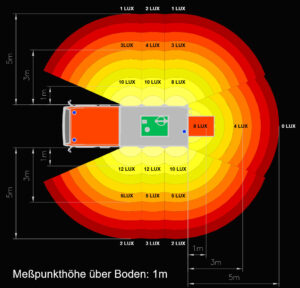 Light measurement of the Rosenbauer AT

It was barely possible to enter the raised cabins in narrow streets. So an entry system that made it possible to get in and out safely in any door position was required: and thus the patented rotating staircase system with braking mechanism was created. The roof also needed to be flat in order to reduce the risk of stumbling as much as possible. As a solution, the level lossless tank overflow system was created.

Light being a prerequisite for good visibility led to many solutions in which LED technology – then still very much in its infancy – was incorporated. The LED lighting concept was born. In addition, equipment holders with ergonomic removal, suitable for all common SCBA units, needed to be integrated into the crew cab.

Many other functional details found their way into the series production of the AT2. As with the first generation of the AT, the solutions were well-coordinated, resulting in a coherent overall system for operational crews.

Unexpected success of the Rosenbauer AT

The heir to the original AT was a huge success. The sales figures rose drastically and the economic impact made new developments possible.

In 2006, new ideas and market responses pushed us to further develop the AT. The competition was hot on our heels, the sales department expected further improvements, and of course we already had plenty of new ideas. In 2007 the go-ahead was given for the development of a new generation of the AT. But more about this in the next blog post!

In conclusion: The AT has been – and will continue to be – developed by a carefully selected team with broad practical experience, with the best technologies having been continuously integrated in order to achieve our goal – responding to the needs of fire departments for more than 25 years.

In our video series you can learn more about the development of the Rosenbauer AT.

›› Complete video playlist on “25 years of the AT”

About the Author: Alexander Ronacher

Head of Innovation Technology and Research