A multifunctional aerial with first-attack qualities on a maneuverable Commander chassis.

Since last year, Wyndmoor Hose Company No.1 has been operating with a new 55’ Articulating Cobra Platform (ACP). The vehicle combines no less than five functions. Firstly, it transports all the equipment that the fire department requires for first attack extinguishing consisting of an integrated pump (1), extinguishing agents (2) and hoses (3) with a length of over 500 m (all dimensions). The latter are kept in both the rear storage compartments and the extended front bumper. In addition, the truck has a set of ground ladders (4) on board and is fitted with an high reach extendable turret (5), which facilitates fire fighting from an elevated position.

The new 55’ Articulating Cobra Platform is a highly versatile and maneuverable apparatus with an elevated masterstream. The rescue cage is equipped with a powerful turret, which is directly linked to the integrated pump via a fix-mounted waterway and four A-jacks can be run out in order to provide stability when water is expended from the cage. Moreover, in order to be able to drive through partly narrow and winding roads in its alarm area, the Wyndmoor Hose Company selected a compact, two-axle chassis with a short wheelbase.

A great deal about the truck, which apart from pumps, a water tank, hoses and couplings also carries an extensive range of technical equipment such as fans, rescue devices, door openers, motor saws and other tools is unique! Alone the combination of an engine truck and aerial, pumper and aerial rescue is very special and is otherwise only familiar in Chicago. Equally unusual for a US fire truck is the fact that it lacks any gleaming chrome elements.  However, this was a deliberate decision on the part of the Wyndmoor company No. 1 as it makes vehicle cleaning easier. Yet another special feature is an American roto-ray revolving warning light, which is mounted on the front bumper. This is over sixty-years-old, but still functions perfectly and was taken from an earlier truck model. 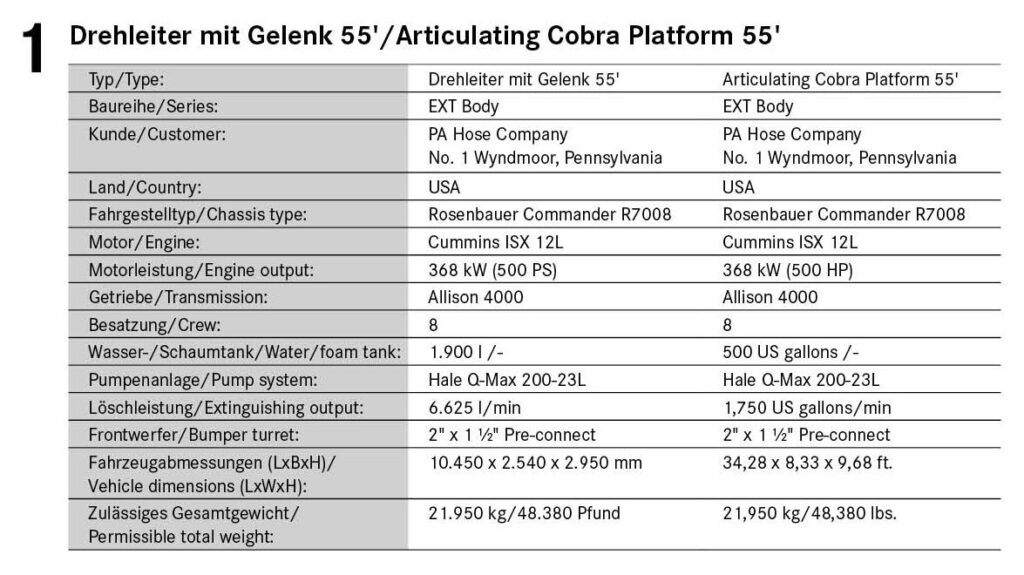 If you want to know something about America at Rosenbauer, “Mr. America” Josef Kern is your man. Even colleagues from Rosenbauer America get tips from him when they travel in the USA. With the help of the 900 employees in the USA and his support, Rosenbauer managed to become the #1 in the worldwide firefighting business, as every third vehicle is already manufactured to American standards.