Right ​in ​the ​middle ​of ​things – ARFF Working Group Confrence

“Global Partners Working Together for Aviation Fire Safety & Protection” – it was under this slogan that the joint conference of the ARFF Working Group and the Airport Fire Officers Association (AFOA) was held from May 7-8, 2019 in Linz, Austria. The aim of the event was to enable experts in the field of aircraft rescue and firefighting (ARFF) from all over the world to exchange ideas, benefit from the various experiences, and get to know new perspectives. Right in the middle of things, instead of just being there this year, was Rosenbauer! 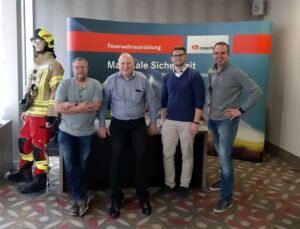 For my sales colleagues and myself, the ARFF WG Conference started the day before the actual event, when we were allowed to set up our small but very nice Rosenbauer stand. Even here, the first contacts could be established or cultivated with participants who had already arrived.

On the actual day of the conference, there were many exciting presentations on the program. I particularly remember a presentation on the drone incident at London Gatwick Airport and the various tactics and procedures used during the aircraft interior fire-fighting. There was also a contribution from a flight attendant and a pilot from Spain, who were able to give the participants the view from the cockpit of a damage situation. In addition to the field reports and tactical components, there were also presentations for personal development. Among other things, that the human factor is decisive in an assignment or that the work of a firefighter also entails mental stress. These contributions underlined once again that fire service – no matter in which country – is more than just fighting fire with water. 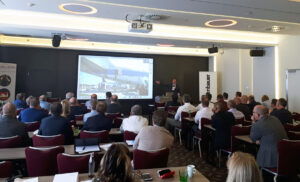 Exciting presentations and interesting experience reports on the first day.

Rosenbauer was represented with an exciting talk by Herbert Poellinger on the subject of firefighting technology of the future. The discussions that followed showed in particular that nearly everyone is concerned with the future and the challenges that lie ahead. During the breaks, we were able to exchange ideas with participants and speakers in a relaxed atmosphere and get some important feedback on our products.

On the second day, the conference attendees were invited to the Rosenbauer Hosting Day. Rosenbauer used this day to present our expertise in the field of airport vehicles and beyond. Together with a large number of colleagues, many topics were prepared in advance in the form of stations.

The day started with a company portrait by our CEO Dr. Dieter Siegel. The participants were then divided into groups and guided through the program by their Rosenbauer guide. In addition to a detailed insight into the complete PANTHER series, the live performance of a PANTHER 6×6 with STINGER and the Rosenbauer escape stair could also be considered in detail. During a tour through Plant 2, the production site of the PANTHER could be seen and the PANTHER Tactical Simulator was introduced. The presentation of EMEREC DEVS was also part of the program once more. It was also important not to forget the heart of most firefighting vehicles. On the tour of Plant I, the main focus was on Rosenbauer fire-fighting systems, especially built-in pumps, foam proportioning systems, and turrets.

Pulling on the same string together

Special thanks go to Duane Kann, who not only gave a brilliant speech on the first day on the topic of leadership challenges, but was also one of the great initiators of the conference in Austria as Chairman of the ARFF Working Group.

In summary, for my part I can describe the ARFF Working Group Conference as a success. Exciting contributions have taught us a lot, but above all the feedback from discussions with experts and their experiences can help us to further develop the products in an even more user-oriented way. Important contacts could be made, and I think that we were able to get some of the participants excited about our products.