A totally crazy idea. Until someone thought it was possible …

3 minutes read
Previous Next
A totally crazy idea. Until someone thought it was possible …

From a small idea that is too crazy to be feasible, to an indispensable tool for saving human lives. The origins of the aerial ladder L32A-XS.

It’s sometimes surprising when you look back at how our products came to life. I don’t want to start with “Once upon a time…,” because this is no fairytale.

A few years ago, we held a series of discussions on the topic of how to improve the L32A. In countless conversations with our customers, the idea of a longer cage boom continuously popped up. 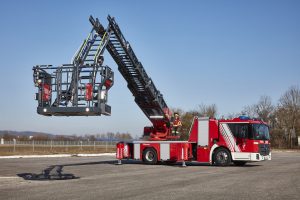 This would make it possible, among other things, to reach the ground with the cage in front of the driver’s cab in order to remove an injured person from it on a stretcher. Another important point is that an even greater distance to the building can be bridged with a longer cage, e.g., dormer windows on sloped roofs. In our opinion, the known solutions had critical disadvantages, which we were not willing to accept. We did not want this single improvement to negatively impact other parameters, such as the horizontal reach, because every meter counts in a critical situation. One thing was clear; we did not want any extra weight, or any additional complex technology. To make the cage boom longer, one thing was clear: the cage boom pivot needed to be moved further back into the ladder.

But what does this mean for users?

Short of any other ideas, the ladder would have to be pushed out a fair distance before the cage boom could be inclined. All kinds of control technology would have to be included in order to achieve this design. The response from our colleagues, both volunteers and professionals, was clear: They could not accept this, because firefighting operations often take place in tight spaces.

Now it was clear which problem had to be solved. The wildest ideas were discussed, until one colleague had the brilliant idea to “just cut out the rungs.”
After the colleague had examined his idea more closely, he became certain that it was feasible. He discussed his idea with the ladder specialists, and they outlined the first concepts of what an actual solution might look like. Now it was time to convince everyone of this crazy idea, and suddenly everything fell into place. We analyzed the challenges to be overcome and how we could tackle them. The atmosphere was electric, because everyone knew we had found something special. In the following days and weeks, brainstorming sessions were held time and again. In these discussions, it was noted that even the tried-and-tested L32 concept had weaknesses in confined spaces, because if the roads are very narrow, often the 1st and 2nd floor of a building cannot be reached with the cage. Here, the new concept promised a tremendous improvement.

The idea was discussed with all decision-makers. This is always important in the technical field, because sometimes a good idea is not enough: the courage to drop everything and implement the new idea is also needed. In this case, this means putting aside development projects in order to realize this new idea.

The aerial ladder L32A-XS was born The L32A-XS was unveiled more than four years ago, and our expectations for its success have been far exceeded. It seems to be precisely the tool that fire departments were missing for their wide range of operations. For a long time, it was all about aerial rescue devices going higher, farther and taking on more payload, all of which is necessary in rescue situations. But there are also many deployments in old towns and in tight spaces which a modern ladder must also be able to master. Today, the XS is in its second generation, because there is always something we can improve upon. So you can already start looking forward to what the next step has in store.