7 minutes read
Previous Next
2,500 story points – from the CFT to the RT

In the summer of 2017, a strategically important decision was made at Rosenbauer: the series development of this vehicle type was to be started based on the CFT technology! The goal: present at Interschutz 2020.

But how should the development be organized? Which methods should be used? How should the team be assembled, and which external partners can help lead the scientifically and experimentally geared CFT project into series development?

One thing was clear: in the dynamic environment of electromobility, one cannot rely on classic project management methods. The project had to be set up using agile methods. It was also our goal from the beginning, in line with the “open innovation” approach, to appeal to some customers with a high affinity for the CFT to join us at the beginning of the series development in order to actively shape the development process and to test the vehicles in real-life scenarios.

And we were also aware that, in order to achieve this goal, it had to be ensured that the development team could fully concentrate on this task without distraction! This motivated us to establish an internal start-up. On August 18, 2017, Rosenbauer E-Technology Development GmbH (RED) was founded, with the main task of implementing the series development and thereby positioning the unit as the competence center for e-mobility within the Rosenbauer Group. We started with a small development team, with most of the engineers recruited internally from the CFT project.

How to eat an elephant?

Evaluation of the story points on September 13, 2017

In the beginning, there were many uncertainties surrounding the project – especially regarding its organization. How could we manage to implement series production in less than three years with such a small team, when large truck manufacturers are only able to make minor progress in rolling out their e-mobility strategies, with much greater resources available?

We decided to apply the scrum method from the get-go. In the first kick-off workshop, it was possible to collect, prioritize, and evaluate all essential task packages, and allocate story points according to the effort required. From then on, we knew that we would have to get through almost 2,500 story points from Fall 2017 to June 2020 – about 75 story points per month.

The electric powertrain of the RT

The CFT (Concept Fire Truck) was the measure of all things in terms of functionality, ergonomics, and driving dynamics. All of this had to reach at least the same standard when adopted to the series development. But the battery capacity in the concept vehicle of 20 kWh was considered too low to be suitable for operational use. From evaluations of telematics data, we knew that we would need a battery with a capacity of at least 50 kWh in order to be able to handle most firefighting operations. However, if the topography of a city is more demanding or if a larger operating radius is needed, additional battery capacity may be required. 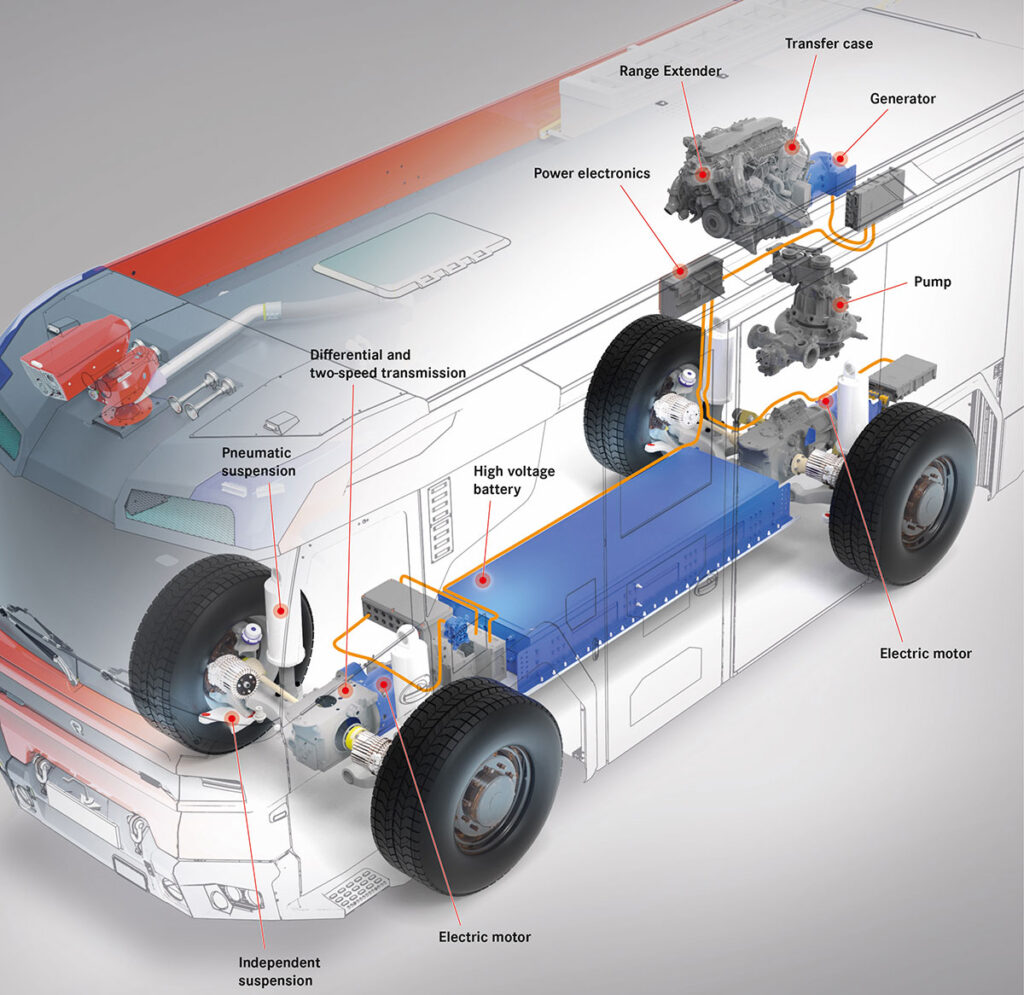 Chassis and drive system of the RT

In 2018, we found the ideal partner for the electric power train in Volvo Penta. Volvo Penta, as a subsidiary of the Volvo Group and long-term partner of Rosenbauer through the supply of D16 engines for PANTHER ARFF vehicles, has access to the know-how of the Volvo Group, whose e-fleet now consists of more than 4,500 buses and who, with the FL and FE Electric, is considered one of the pioneers in the electric truck sector. And it is their modular system from which we obtain all high-voltage components, such as the batteries, the e-machines, and the power electronics and control units, including a cooling system that has been especially developed for Rosenbauer.

Energy when it matters

BMW also has a longstanding partnership with Rosenbauer: the first generations of the FOX portable pump were powered by BMW Boxer engines. A special development partnership with BMW was started for the CFT in 2014, with a 6-cylinder passenger car diesel engine with 3 l displacement and 200 kW output being utilized as a range extender. We had a strong desire to incorporate this high-performance engine into the series development, and concluded a series supply contract for B57 engines from the BMW plant in Steyr, thus allowing us to continue our successful development cooperation with BMW.

The energy from the range extender drives a generator from the Volvo modular system via a transfer case, and it is also connected to the water pump via the very same. The pump can therefore be driven either electrically or mechanically. We opted for Rögelberg for the development of this intelligent gearbox, not least because of the German gearbox manufacturer’s extensive expertise and high level of vertical integration.

But the strongest drive is useless if you can’t transfer the power to the road. As with the CFT, an independent suspension was used for the series development. This was successfully implemented with our long-term supplier Kessler. Kessler was also responsible for developing the differentials and the two-speed transmissions on each axle.

A hydropneumatic suspension was tested in the CFT. For the series development, we wanted to meet customer requirements for the level regulation as exhibited by the CFT, but the technology needed to be simpler and more maintenance-friendly. US-based company Hendrickson had the right solution in the form of robust pneumatic cylinders that allow the vehicle to be raised and lowered, providing ground clearances from 175 mm to over 350 mm. 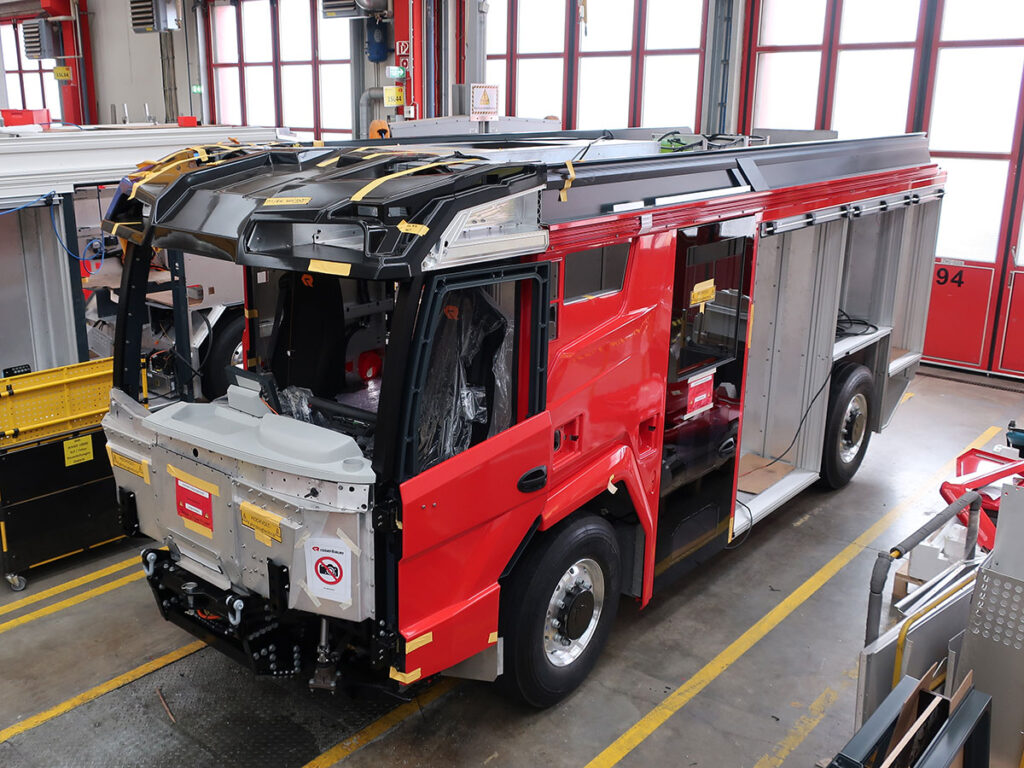 The vehicle, which weighs up to 18 tons, also needed a way to slow down! Although the use of multi-stage adjustable recuperation is usually sufficient in flowing traffic, there is always a situation where the braking performance is crucial. In this respect, Knorr-Bremse, with its pioneering technologies (ABS, ESP and ADM), is the right development partner for our production-vehicles. Right from the very first test drives, we were impressed by the high braking performance and controlability.

In order to meet the functional safety requirements of ISO 26262, the decision was made to choose a partner whose electronic components are certified accordingly. We found this partner in TTControl, the manufacturer of electronic control units specializing in mobile machines, with whom we also implement the necessary content for successful certification of the entire vehicle in accordance with ISO 26262.

Alongside the PANTHER, the AT, the ET, and the AVENGER, moodley was also responsible for the design of the CFT. For the series development, an even more functional concept was implemented, in order to meet all standards and laws. The challenge was to not sacrifice any of the ergonomic advantages of the CFT. And, to the contrary, especially in the design of the interior, many findings and suggestions for improvement from the CFT were successfully implemented in the RT.

We won’t miss out on Interschutz! 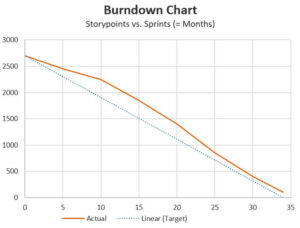 The development work and the construction of the first pre-series vehicles were in full swing when COVID-19 thwarted our plans in March 2020: Interschutz was postponed!

But it soon became clear to us that we could continue to work at full pace. We only allowed ourselves a short break during the Spring vacation in April 2020. Our goal was that, in spite of Covid-19, we would be ready to present the first series model, RT prototype 1, by the original Interschutz date. After almost three years of development and over 2,500 story points, and together with our development partners, we had finally made it!

Just in time for the start of the virtual Interschutz trade fair, on June 14th, 2020, we presented the RT test model! This also marked the start of the intensive testing phase for the pre-production vehicles – first internal testing and later the customer-specific acceptance tests by the fire departments in Berlin, Amsterdam, and Dubai – prior to the vehicles entering real-life on-location testing before the end of 2020, as originally planned. 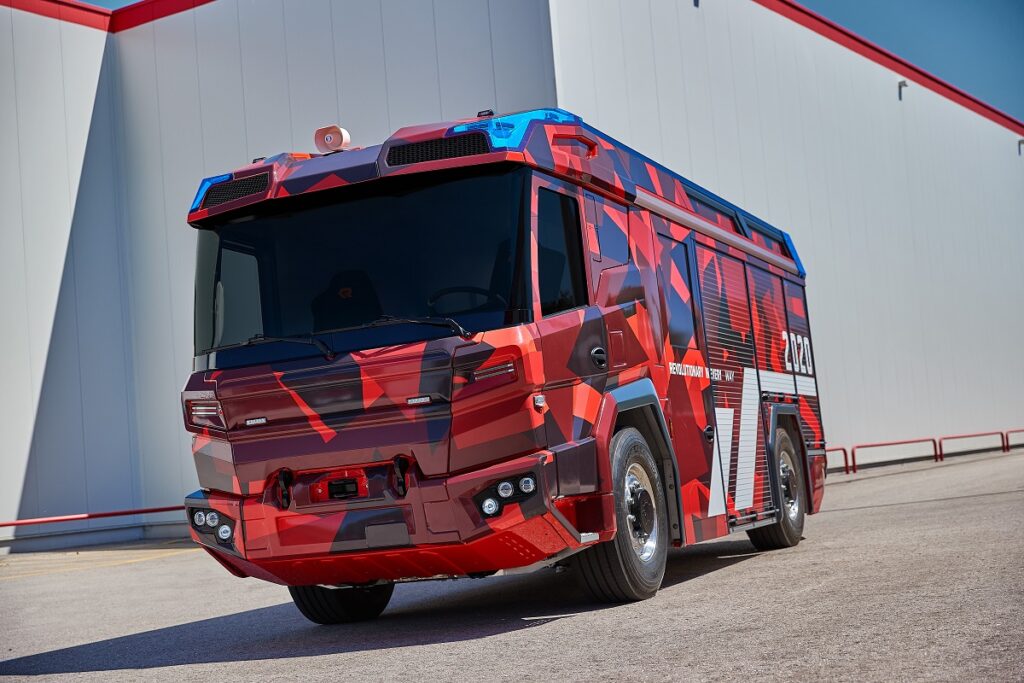 The RED development team, which has now grown to twenty people, as well as the mechanics and electronics specialists in fabrication, deserve the greatest thanks for this outstanding achievement.

Of course, we would also like to thank all of our development partners, because each and every single component is of the utmost importance in order for everything to be right at the crucial moment and for the RT technology to work 100%.

About the Author: Michael Friedmann

As Head of Group Strategy, Innovation and Marketing, Michael Friedmann spins ideas for the future at Rosenbauer. Whether in the development of a new vehicle concept such as the RT, the use of agile management methods or trend scouting in the field of firefighting - the focus lies always on moving ahead.